There is one Republic Truck on display at the St. Louis Area Historical Society but several still exist in private hands.
​Address:  110 East Crawford St., St. Louis MI, 48880
​Phone:  (989) 875-4463
Website:  https://www.stlouismi.com/1/stlouis/historical_society.asp
You can find out more about the Republic Motor Truck Company at the Alma Library.
Address:  500 East Superior Street, Alma MI
​Phone: (989) 463-3966
Website:  http://www.youseemore.com/alma/default.asp
The factory is still standing but is not open to the public.  It is currently occupied by the Avalon & Tahoe Mfg. Co.
​Address:  903 Michigan Ave., Alma MI

Well before they ever considered building trucks, the Alma Manufacturing Company was established in 1903 and was in the business of manufacturing the McVicker Automatic Gasoline Engine as shown here on this Sanford Map from November of 1910... 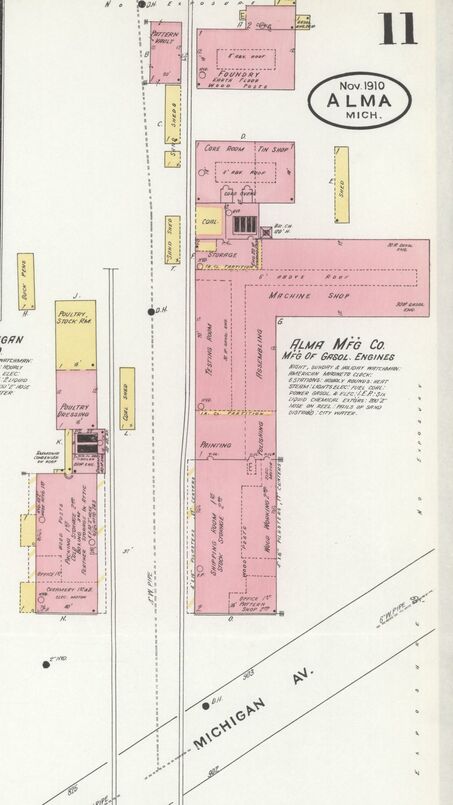 Ruggles, the inventor of what was to be the Republic truck, had started out as a bicycle mechanic but had gotten his experience with automobiles and trucks in Massachusetts with the Knox Automobile Company, the Atlas Motor Company, and the Morgan Truck Company.  He held many patents for truck components and saw Alma as an opportunity to build his own.  He subsequently moved to Alma in December of 1910 and recruited Lee Nummer and a few others from Alma Manufacturing to help build the prototype.  The truck was virtually all hand-made and the blueprints to build more were taken right from the prototype itself as each piece was very carefully recorded.  When the truck was finished it was driven down Superior Street in Alma on a January day in 1911 right to the corner drugstore owned by Charles Rhodes, who would become the secretary for the company.  It looked like nothing more than a motorized buggy having a four-cyclinder air-cooled engine, three-speed sliding gear transmission, 36-inch wheels and red paint. 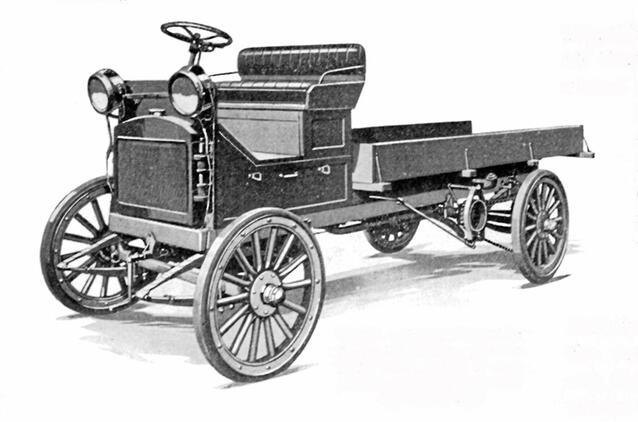 In February of 1911, Ruggles had become the Alma Manufacturing Plant Superintendent and had already enlisted the Cameron Company and their many dealerships to be distributors of the new truck.  In the meantime, the company was still making a few different models of one-cyclinder gasoline engines. 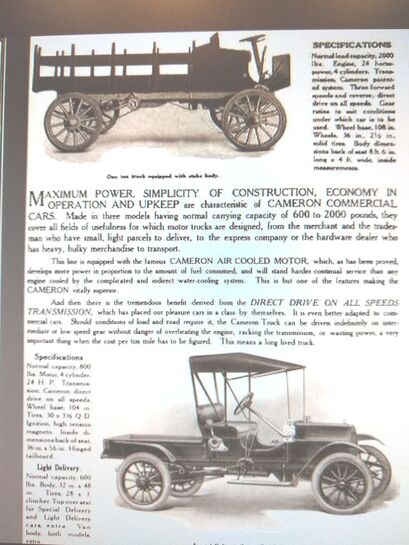 Everett Cameron had notified Ruggles that he wanted the Alma Manufacturing Company to produce a one-ton truck.  The engines, transmissions, and other components would be shipped from the Beverly, Massachusetts plant while Alma made the chassis, wheels, heavy-duty rear axle, and four different bodies.  Trucks started rolling out of the factory in May 1911 and were shipped to dealers all the way into 1912.  Manufacturing the Cameron truck gave Ruggles time to obtain more resources and refine his own design.  Cameron went bankrupt in 1912 and all production of trucks in Alma ceased.  Since Alma had already been assembling trucks and had skilled workers, it made the dream of a Ruggles designed truck a reality.  The first truck Ruggles produced was called the Hercules and it was co-designed by Howard Payne Woodworth.  It was powered by a 30 H.P. Continental Motor and sold for $1775.  Since the Cameron Company had went bankrupt, Ruggles needed a distribution network for his new truck and soon struck a deal with the Maxwell Motor Company.  In March of 1913, the Hercules started rolling off the assembly line and Maxwell's Detroit dealership displayed the Hercules in their showroom.  Maxwell would later go on to become the Chrysler Corporation...
Here is an announcement in "Motor" Volume 20 in 1913 showing the Alma Motor Truck Company taking over the Alma Manufacturing Company... 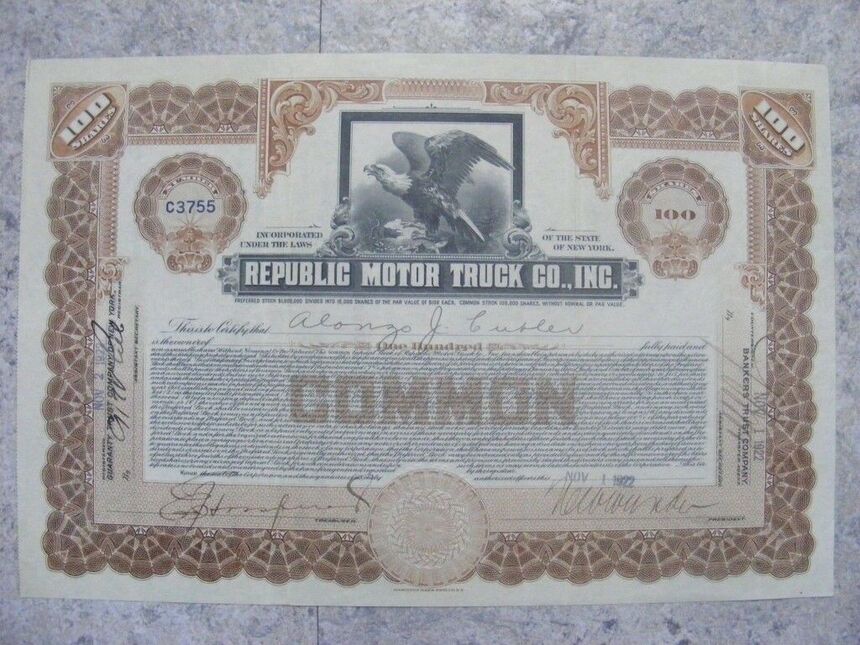 Some shots of the inside and outside of the factory... 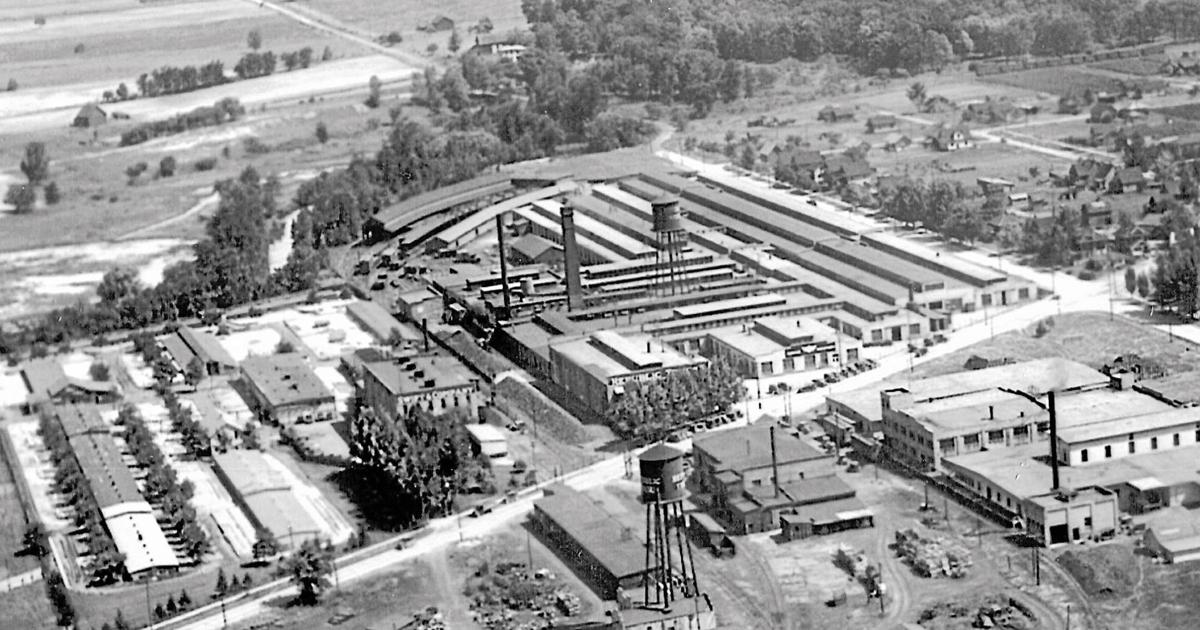 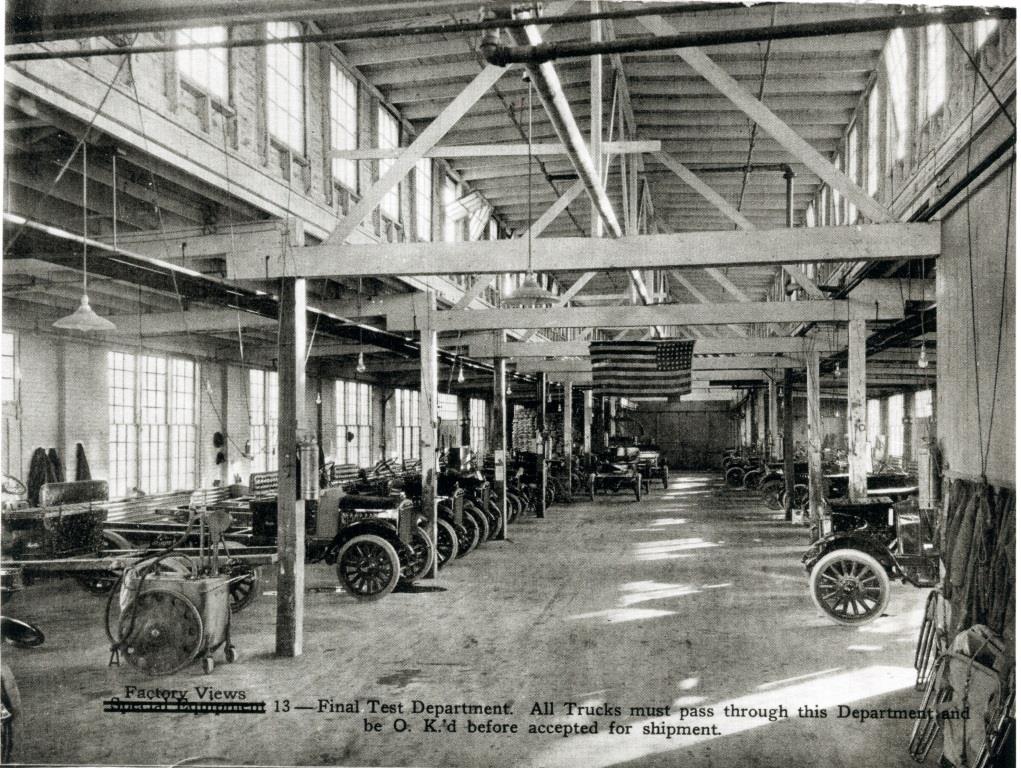 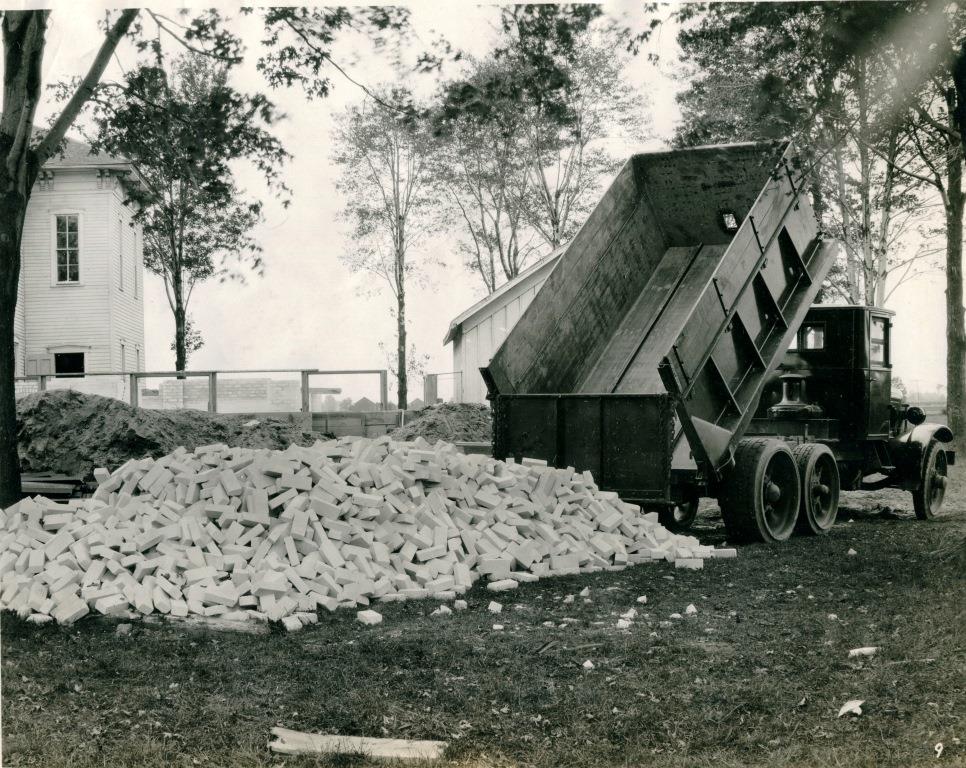 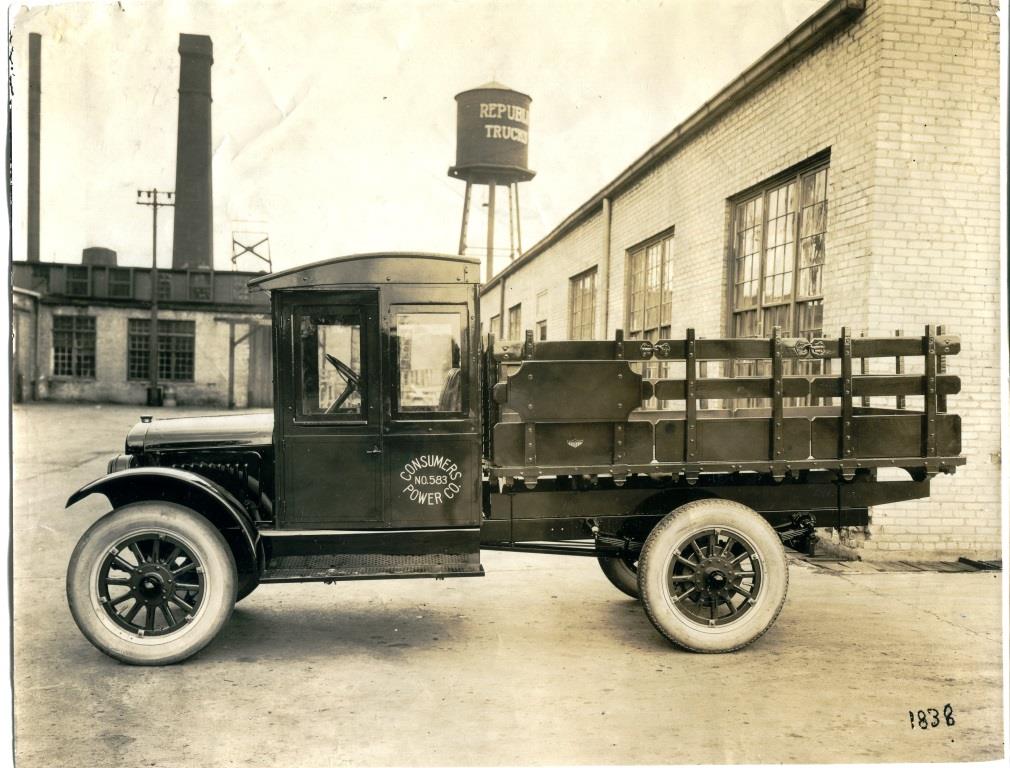 By 1916 Republic was the largest manufacturer of trucks in the world..  One of every nine trucks in America was a Republic and there was a network throughout 48 states of dealers, parts depots, and service centers.  Eventually the trucks were sold and serviced in more than 50 countries.  Below are the Sanborn maps showing the expansion that had taken place by 1917... 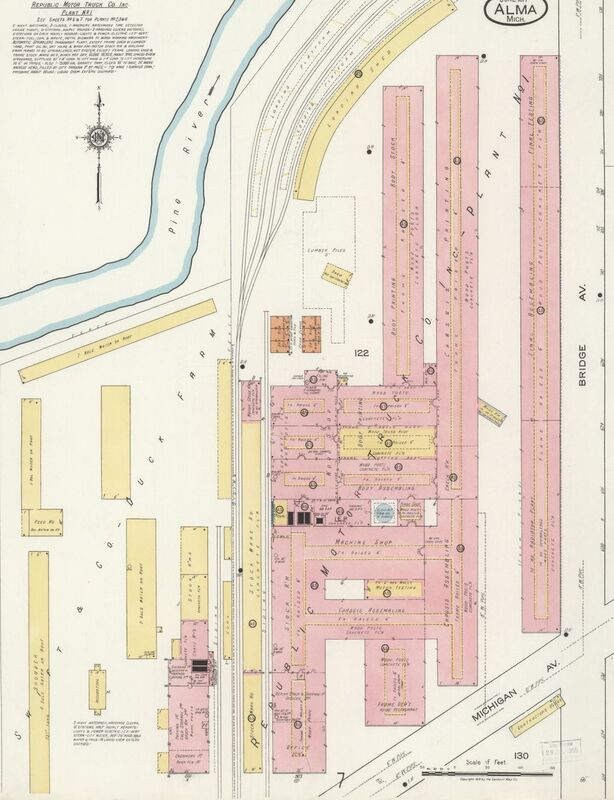 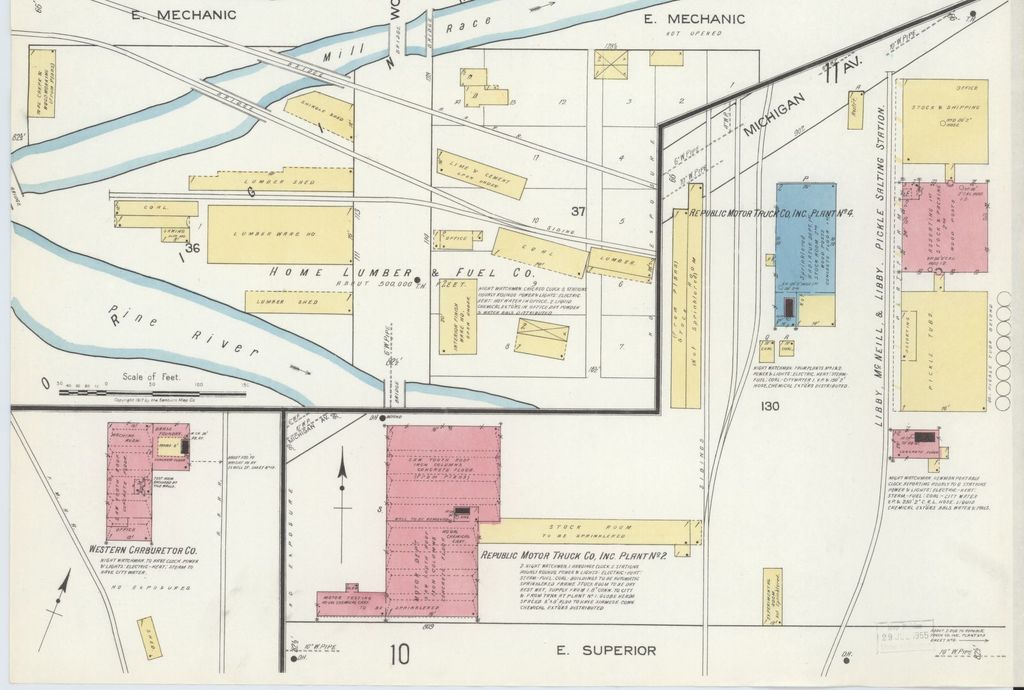 Some of the advertisements from the company over the years... 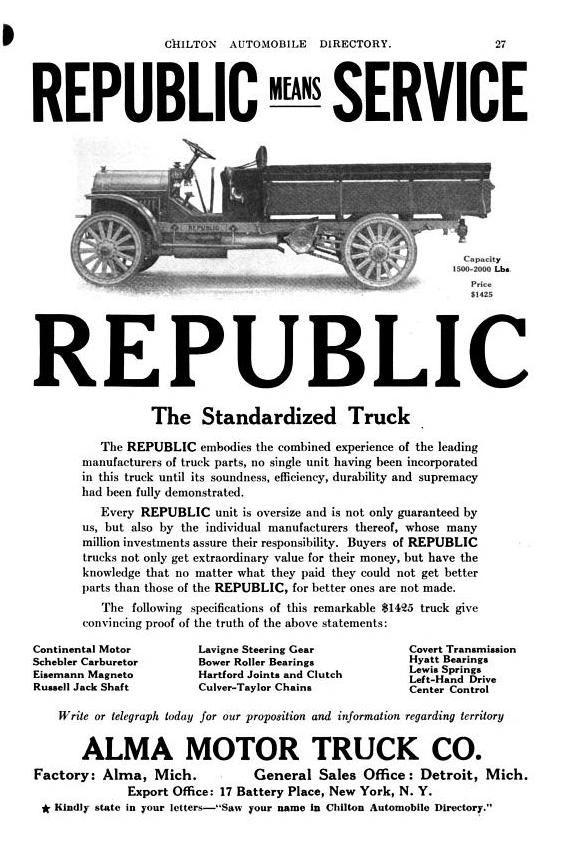 Republic recieved a contract for thousands of "Liberty" trucks to help with World War 1.  The photo on the left is from US Signal Corps - National Archives, Public Domain, 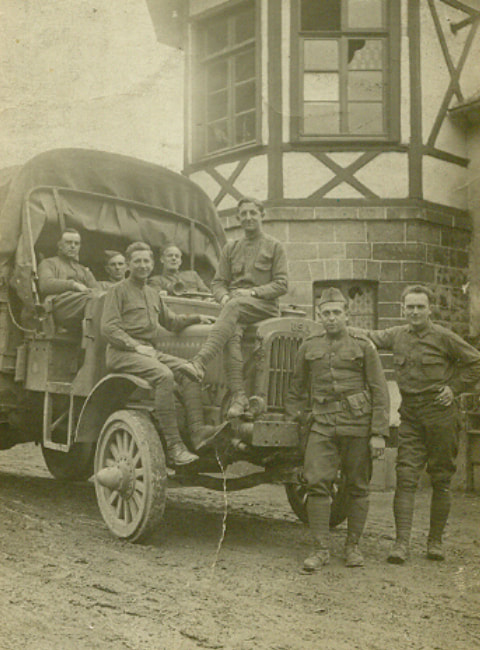 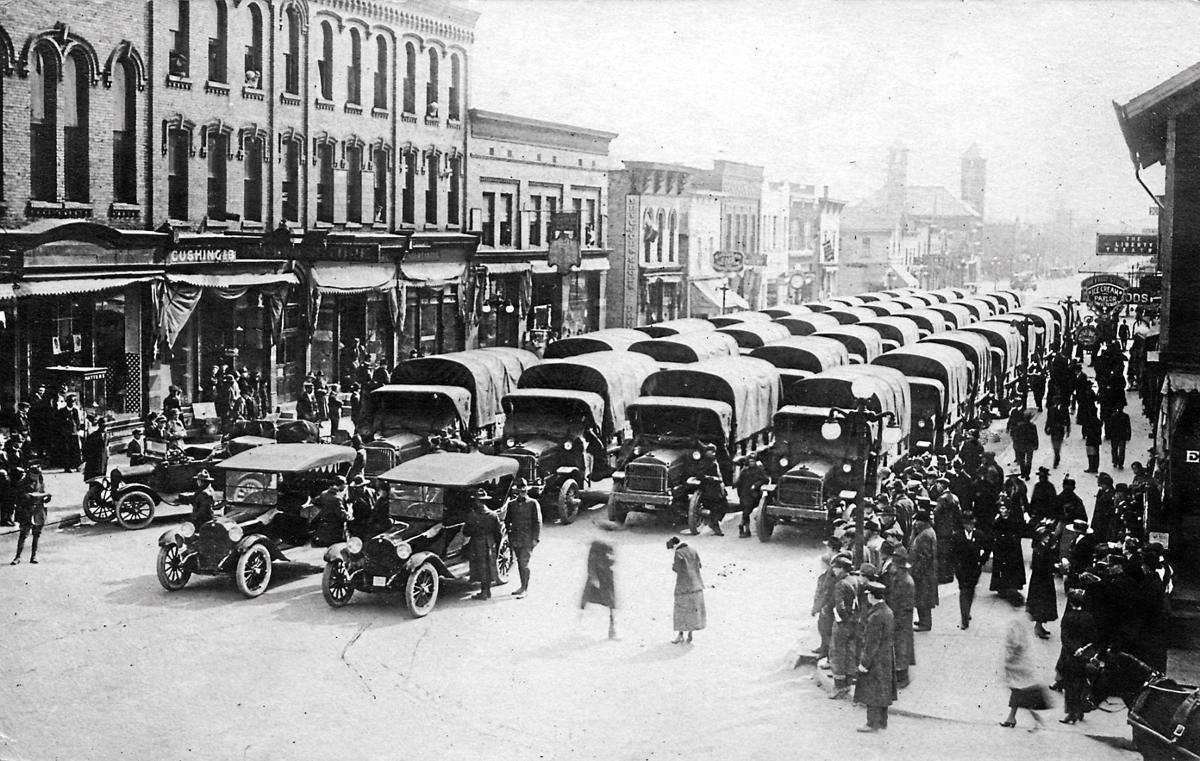 Not only was Ruggles involved with trucks but it appears that there was also a tractor that was made between 1918 and 1920 called the R&P 12-20.  It is believed that of the approximately 200 made only 6 are known to exist:  2 in the U.S., 1 in Australia, and 3 in New Zealand.
Ruggles teamed up with Channing W. Parsons to make the tractor through the R&P Tractor Company with the production also happening in the Republic factory.  It appears development started in May of 1916 when a Waukesha BU4 engine was sent to the firm.  Parsons was issued a patent for a tractor frame and production became a reality.  The weight was 3600 pounds, it had a truck-type 3-speed transmission, and the price was between $1365.00 and $1485.00 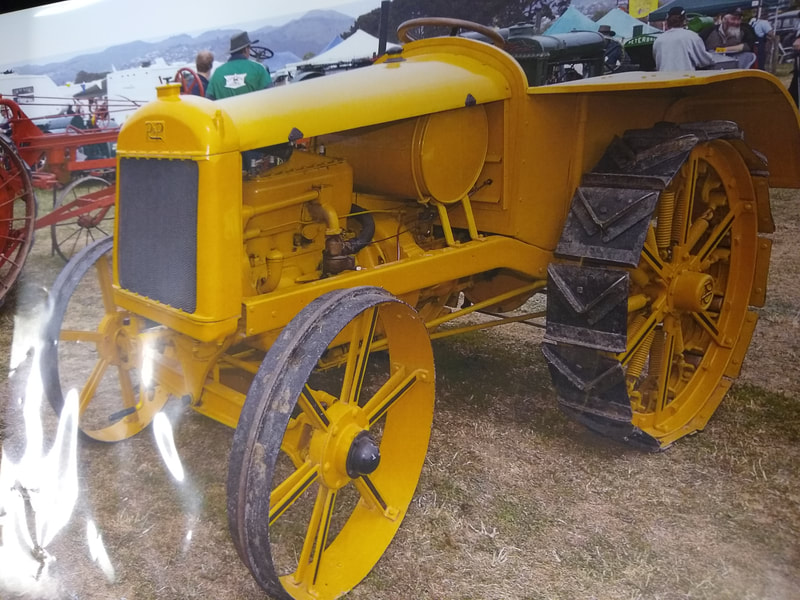 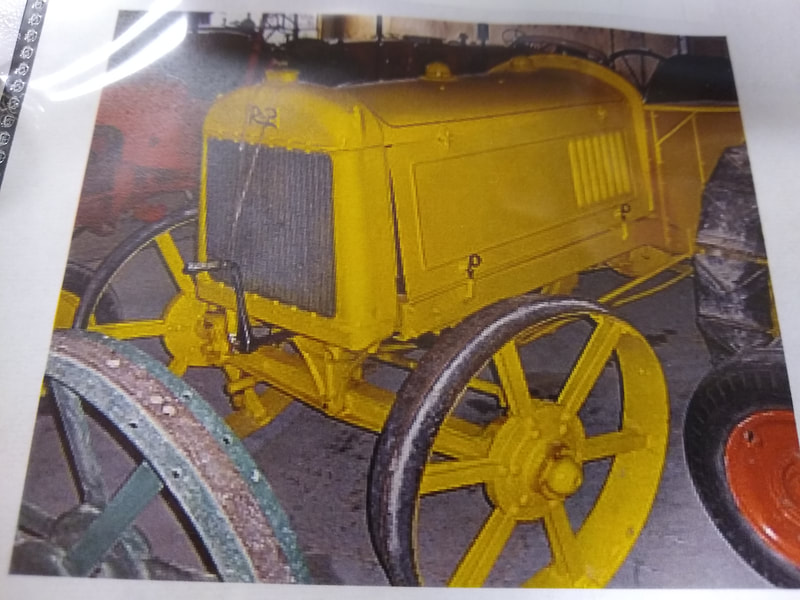 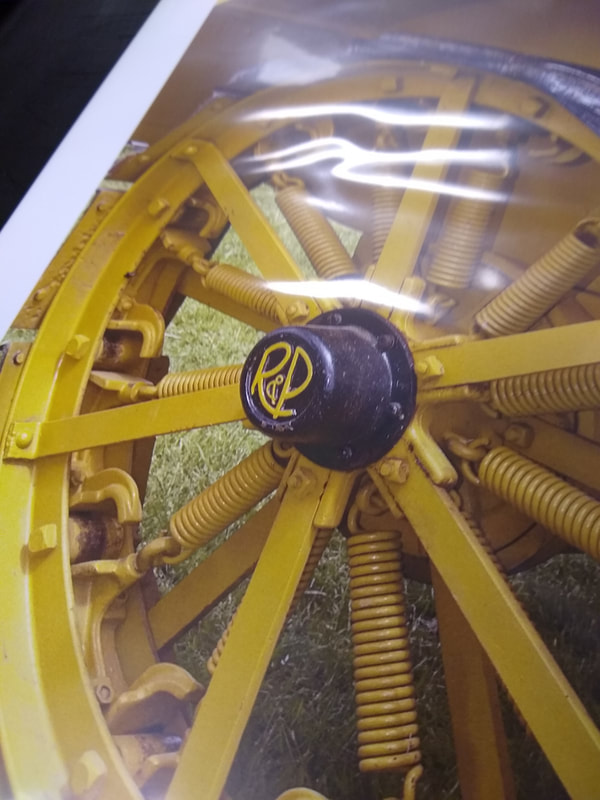 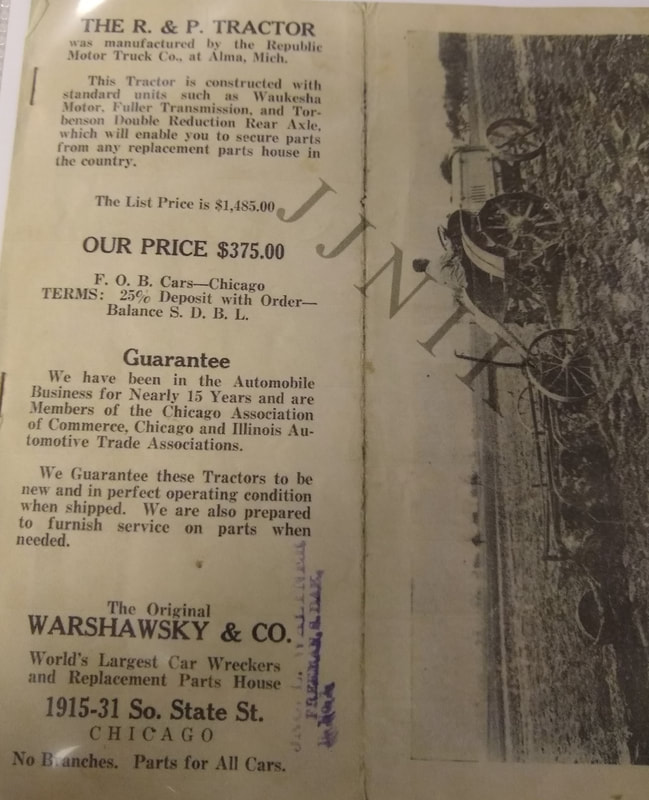 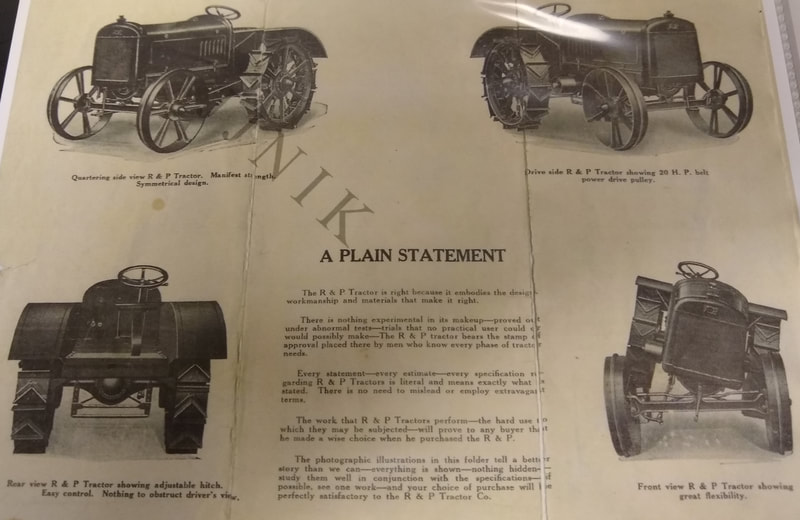 These 2 articles show the suspected sale and move of Republic Truck and then the announcement that Willys Overland had become the major stockholder.  These articles are from the Isabella County Enterprise on August 8th, 1919 and November 7th, 1919... 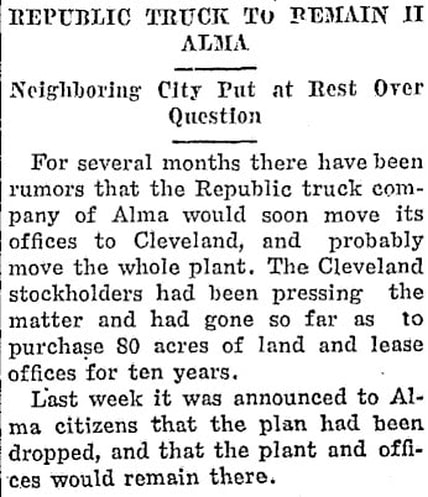 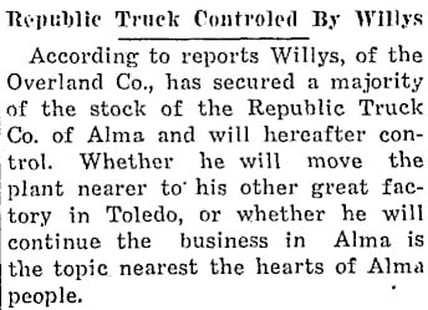 The company eventually went into receivership after agressive expansion and a post-war depression.  The plan was to build 30,000 trucks per year but in 1921 just 1450 trucks were produced.  Republic still produced some trucks until 1928 after being taken over by local men.  They also bought the Linn Manufacturing Company in 1928 who were manufacturers of heavy half-trucks.  In 1929 the company merged with American Lafrance just before the Great Depression and made commercial and fire trucks under the Lafrance-Republic Company name until 1932.  That company was absorbed by the Sterling Motor Truck Company in 1932 and Republic ceased to exist.  It is said that a Republic parts depot operated in town until 1957.

Frank Ruggles went off in 1920 to start another truck company which was named after himself.  The Ruggles company made trucks until 1928 in Saginaw, MI before going out of business.  This article is from The Julian News Jan 7, 2009. 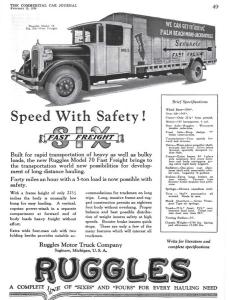 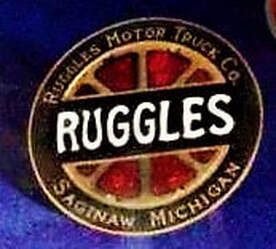