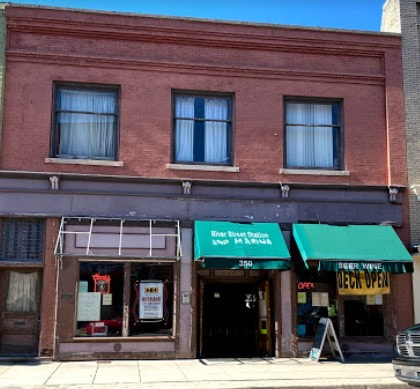 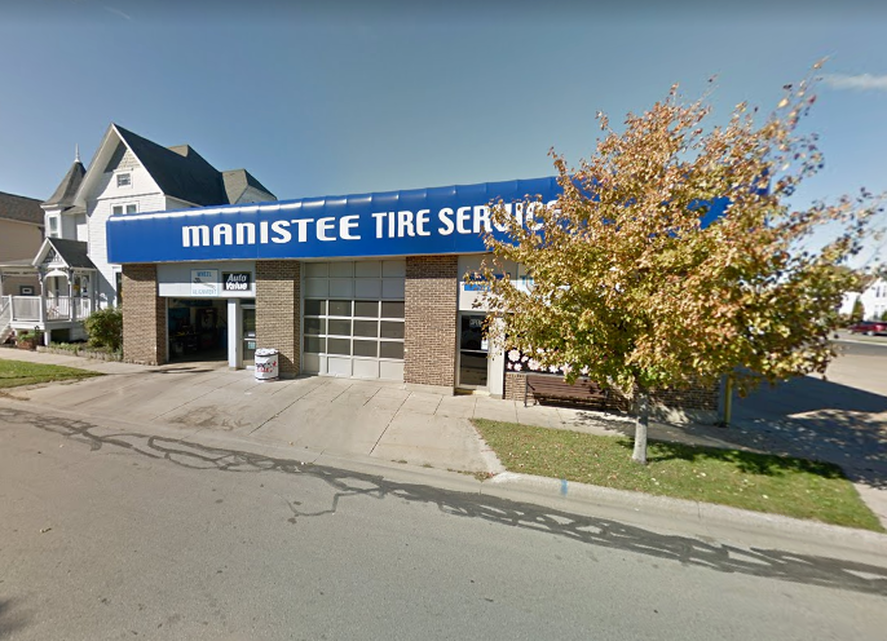 Otto and Henry Brugman started a bicycle shop in Manistee, MI in the late 1890's working on and repairing bicycles, guns, jewelry, and much more.  In 1899 they began constructing a one-cylinder automobile completing it in 1902 and would go on to build additional vehicles from 1907-1909 similar to the early prototype.  Eventually the company became agents for various manufacturers and would serve the community of Manistee until around 1949.

The Brugman family came to the United States from Germany in 1875 and by 1880 were living in Reed City, MI where Henry Brugman Sr. was a watch repairman.  Sons Otto and Henry Jr. were learning the trade from their father which influenced Otto to invent and lock and latch system of which he obtained a patent for in 1893... 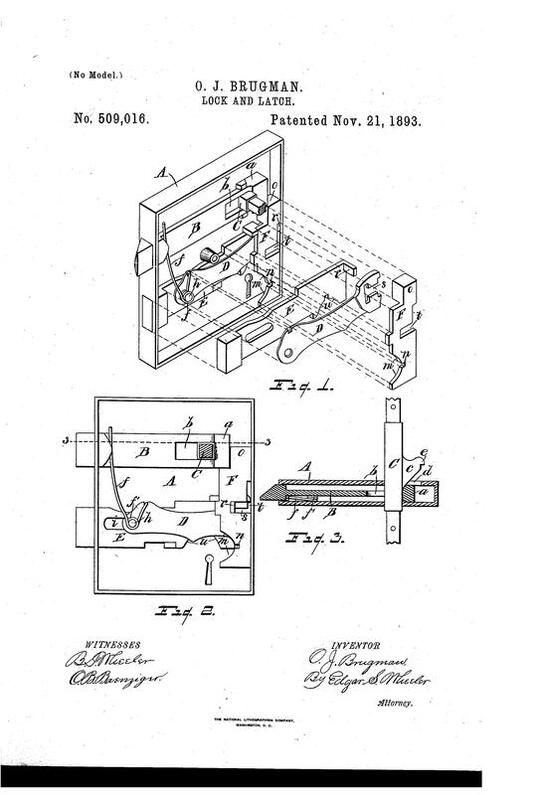 The Brugman Brothers opened a shop in Manistee in the late 1890's building and repairing bicycles, guns, locks, and more.  Otto was initially listed as the only owner in 1899 and in that same year participated in a bicycle race and parade...

Work began on a vehicle that same year which was very early on in the automotive industry as Henry Ford had just invented his Quadricycle in 1896.  One account states the vehicle was built to be used as a taxi service for the community and others as merely a hobby.  The following year the first automobile to appear in Manistee was brought to their shop for some minor repairs...

The vehicle was completed in 1902 and was called the "Manistee".  A one cylinder engine located under the seat powered the vehicle and it had a top speed of 25 m.p.h.   The photo below shows Otto and his sister Mary sitting in the seat... 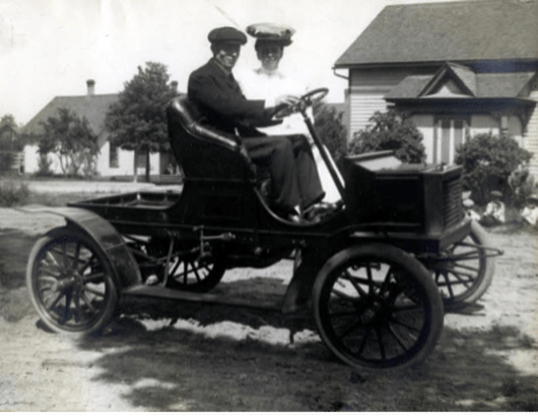 The weight capabilities of the Brugman creation were quite substantial which could further substantiate the theory of a taxi service.  G.E. Brugman who was Otto's son included the following description on the back of the photo.  The photo itself was taken across the street from the Brugman shop most likely by the C.W. Conat Studio shown in the background... 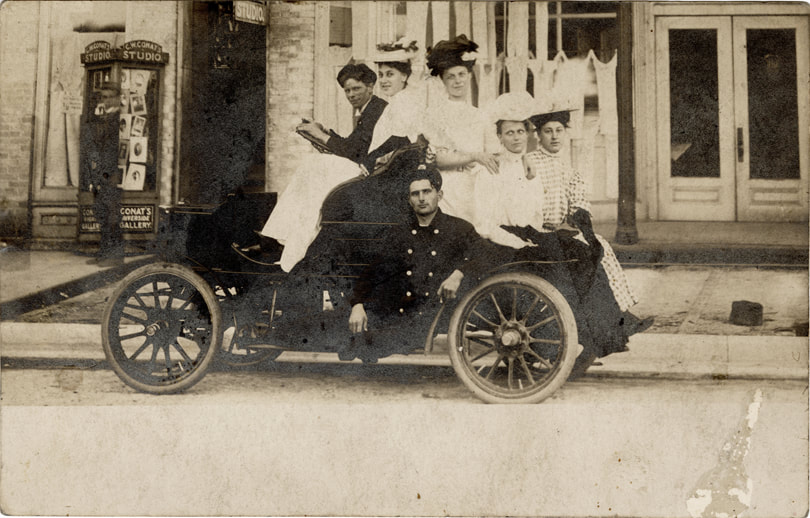 Between 1903 and 1909 the shop showed both 344 and 350 River Street as addresses for the business possibly due to expansion or merely printing errors...

Brugman continued to be listed as a manufacturer through 1909.  According to G.E. Brugman this building would be where the automobile manufacturing would take place as the shop at 344/350 River would not be suitable.  His account states that even the original vehicle was built in this shop which would put the first vehicle being built in 1907-1908.  According to another account, the vehicles were built for other citizens of Manistee because of the outstanding Brugman example... 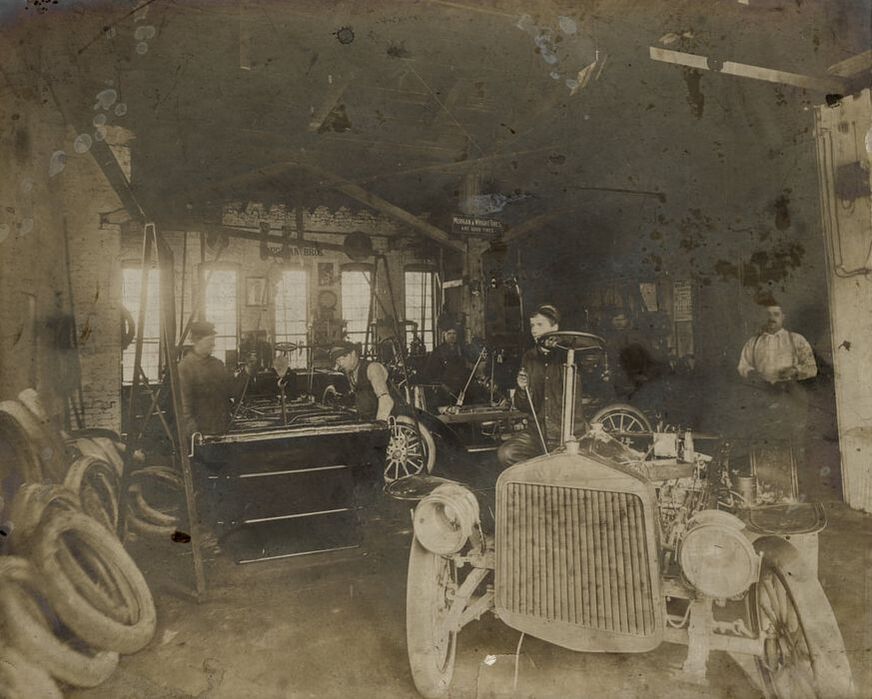 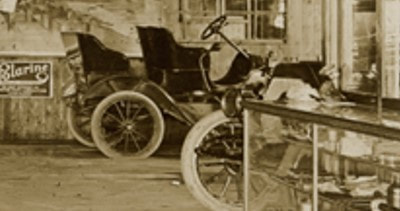 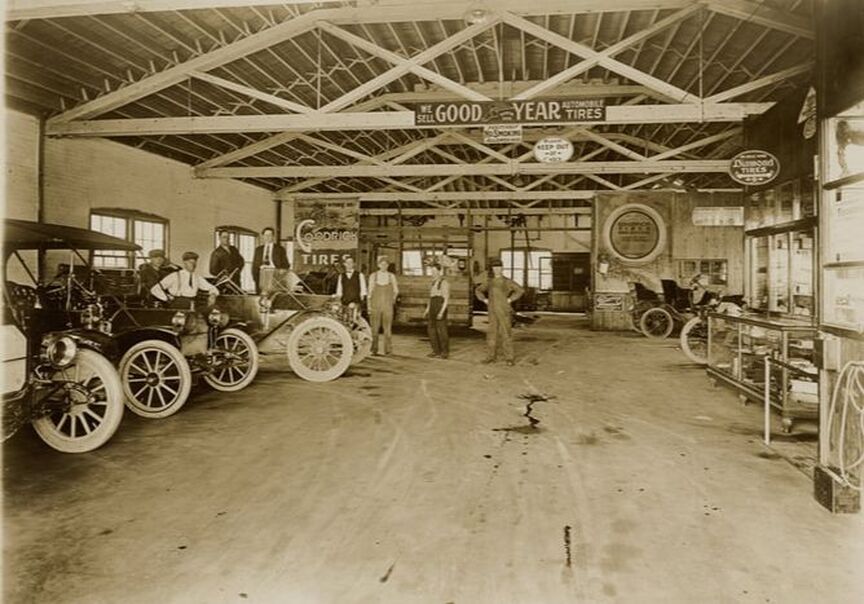 The theory of American Garage and Motor Company as the location of automobile manufacturing seems to fit with the construction of vehicles such as an eighteen-passenger sight-seeing Oldsmobile.  The company was also an agent for several automobile companies as well as sellers of used cars...
In 1910 the business moved temporarily into the old Manistee Iron Works building or "Bowie Building" as it was known at the time at 284-286 River Street.  The company was now known as Brugman Brothers(and Company) and became agents for the Hupmobile, Overland, and the "Thomas Flyer"...

By late 1911 the Auto Garage Company(spelled wrong here) was formed to take over the Brugman Brothers business.  Henry and Otto would remain involved with its operation the rest of their lives but this move would give the business a chance to expand.  Also at the end of that year the American Garage & Motor Company would be up for sale which the newly formed Auto Garage Company would move into by the next year...

As the move was being made into the new building, another car manufacturer would take up residence in the Bowie building.  As the cyclecar craze started, the Manistee Motor Car Company was formed by Charles Elmendorf and G.M. Burr but would unfortunately only be in business for a few years...

As the new location was established, more companies were added for sales opportunities...

In 1915 shows new officers were elected and the brands of Hudson and Peerless were added to the fold.  By the following year, the company bought out the National Garage and Sales Company taking on Dodge Brothers as an additional brand... 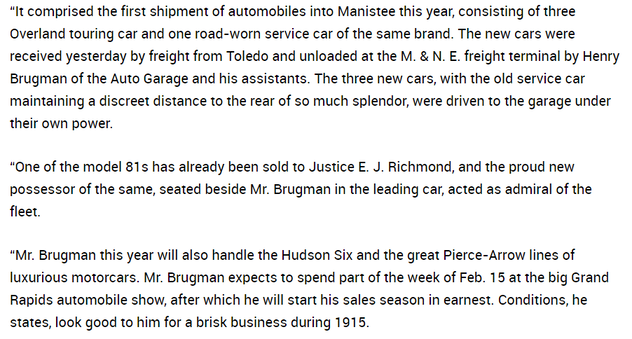 By June of 1917 Louis had moved on to work for the Dodge Brothers in Hamtramck, MI.  Years later Otto's son worked for Chrysler in New York and Detroit...
In 1919 the company moved to 72-74 Division where it remained for the rest of its existence.  By 1940 both Otto and Henry had passed away but the company continued on until about 1949 remaining a Dodge dealer.  The early company slogan of "Pioneer Auto Men" certainly described these two men and their families...