the dodge brothers and upton manufacturing

The Dodge Brothers worked for Upton Manufacturing in the late 1800's.  Together they were mechanical and marketing geniuses eventually starting their own car company.

The original factory for Upton Manufacturing and Port Huron Thresher are no longer standing.  The property is owned by the CN Railroad
​Address:  2115 24th Street, Port Huron, MI 48060 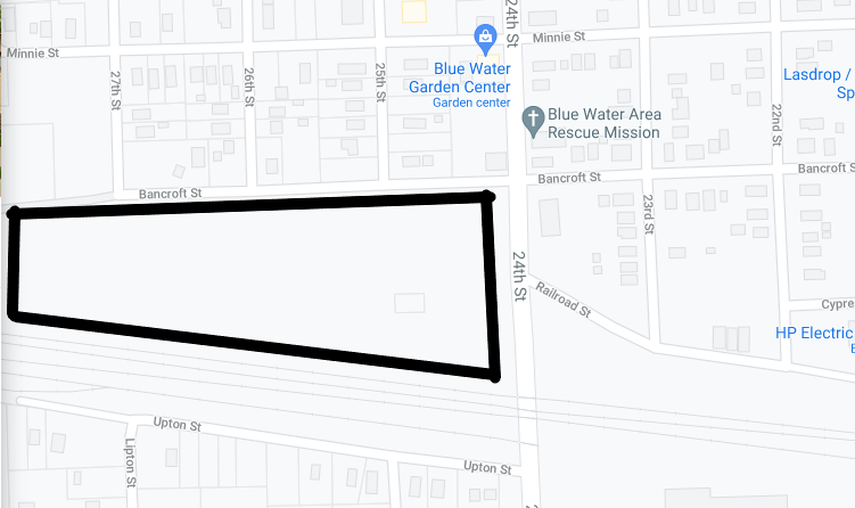 The roads were renumbered as the city expanded.  The first photo is from 1887 showing Upton and the second Port Huron Thresher in 1892... 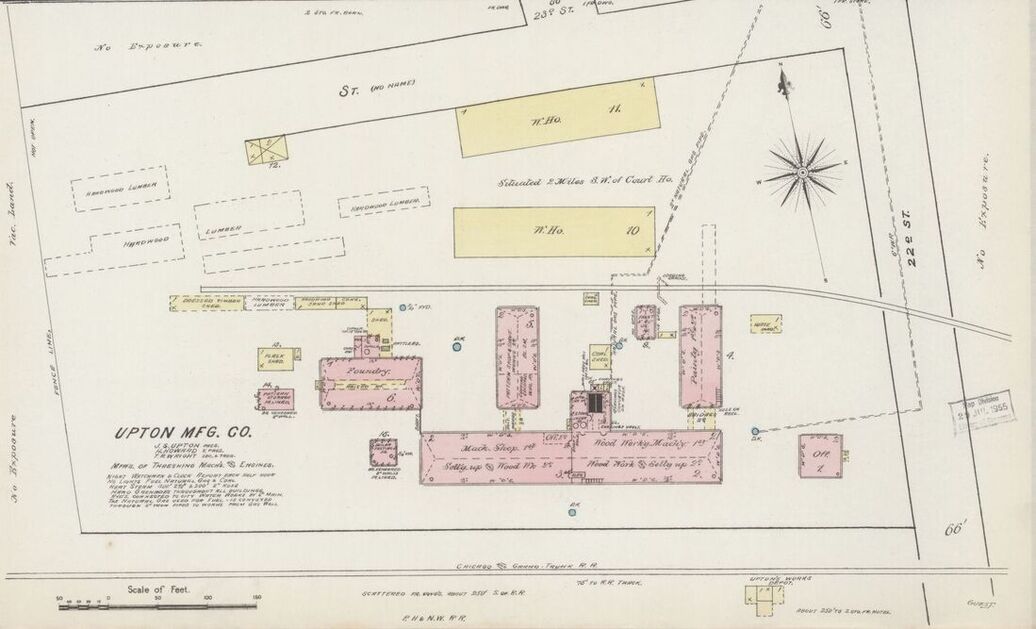 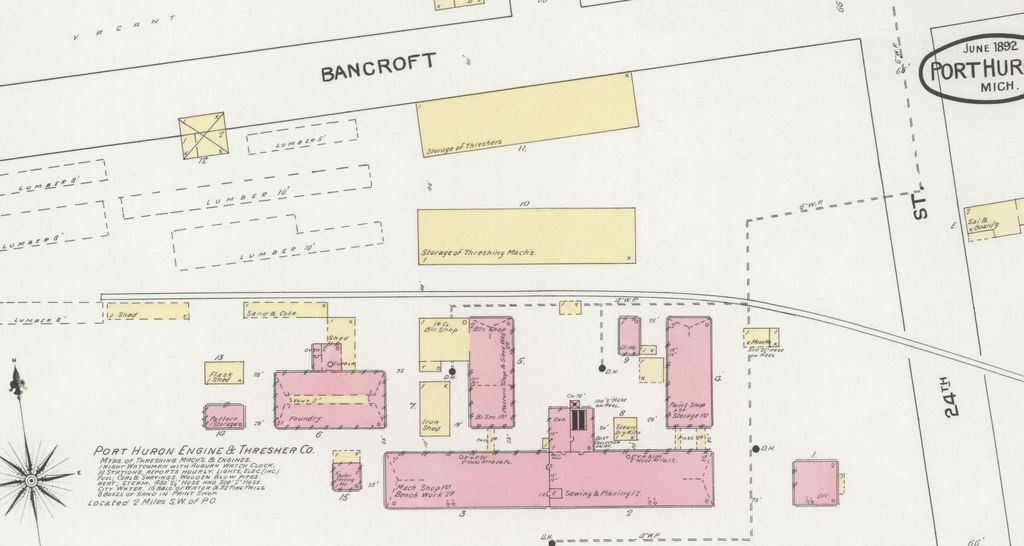 The Dodge Family was said to have lived on 25th Street or in Upton Housing(meant for apprentices).  No records exist showing their exact address but the view below would have been their approximate view walking to Upton Manufacturing.
Address:  25th Street and Upton(Approximate), Port Huron, MI 48060 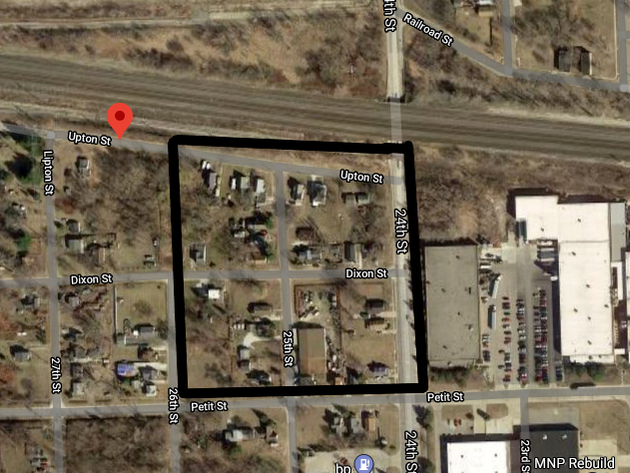 In 1890 the Upton Manufacturing Company changed its name to Port Huron Engine & Thresher.  An example of one of their steam engines is on display near the entrance of Greenfield Village.
Address:  20900 Oakwood Blvd., Dearborn, MI 48124
Phone:  (313) 982-6001
Website:  ​www.thehenryford.org/visit/greenfield-village/

Ezekiel Dodge settled in Niles, MI in 1830 launching a marine steam engine shop.  Several of his eleven sons, including Daniel Rugg Dodge, later assumed control and ran the day-to-day operations.  Daniel married Maria Duval Casto giving birth to John in 1864 and Horace in 1868.  They also had an older sister, Della, who would eventually marry the superintendent of the Upton Manufacturing Company.  An historical marker now sits where their house once was near the water tower...
There was no lack of inspiration during their time in Niles as they tinkered in the foundry and machine shop.  Their uncle Caleb Dodge, who also helped run things, held many patents for devices to help improve railroad locomotives...
It was in Niles that the Dodge Brothers invented their first vehicle...a high-wheel bicycle similar to these from scrap materials when John was just 13... 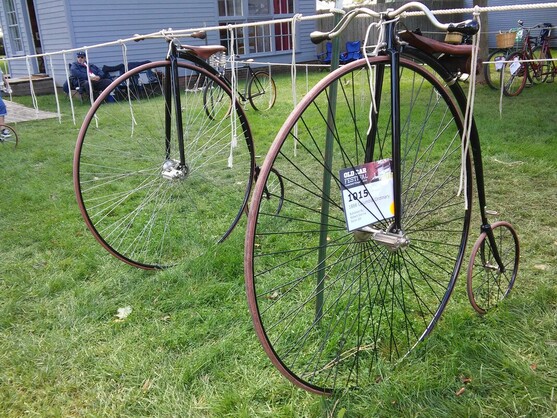 The family moved to Battle Creek upon John's graduation in 1882.  Upton Manufacturing, which was located at the corner of Jackson and Canal in Battle Creek, was a maker of machinery and farm implements.  John and Horace both worked there at some point until the company moved to Port Huron later in 1884. .

The entire family moved to Port Huron in late 1884 or early 1885 which would explain why they don't show up in the city directory of 1885.  It is possible they followed Upton to continue working for the company... 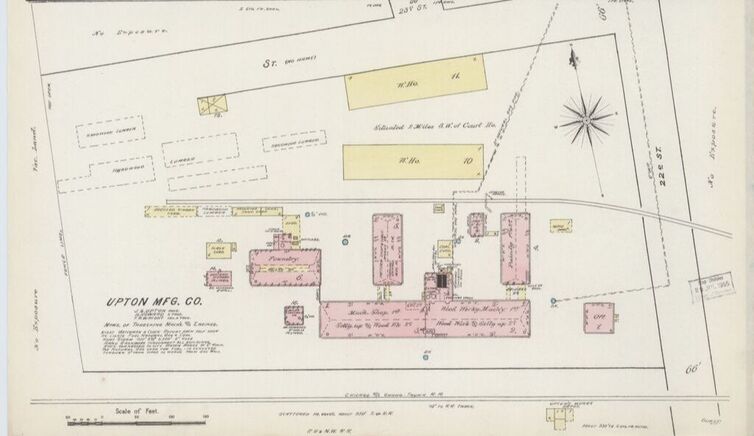 Although the exact area where the Dodge family lived is not clear, there are a few clues to examine.  In the 1887-1888 Port Huron Directory it lists Delbert Dodge and Odell Dodge both working at Upton and residing in Upton housing on the south side of the railroad tracks.  Horace was known as "Dellie" until 1889 and it is possible either of these names below are him(perhaps put in two different ways as a typo).  John would have left for Detroit by the time the directory was compiled and not shown up at Upton.  The article below states that Eugene Moak also worked at Upton and was a family friend.  He remembers the family residing on 25th Street which would most likely put them in the area below... 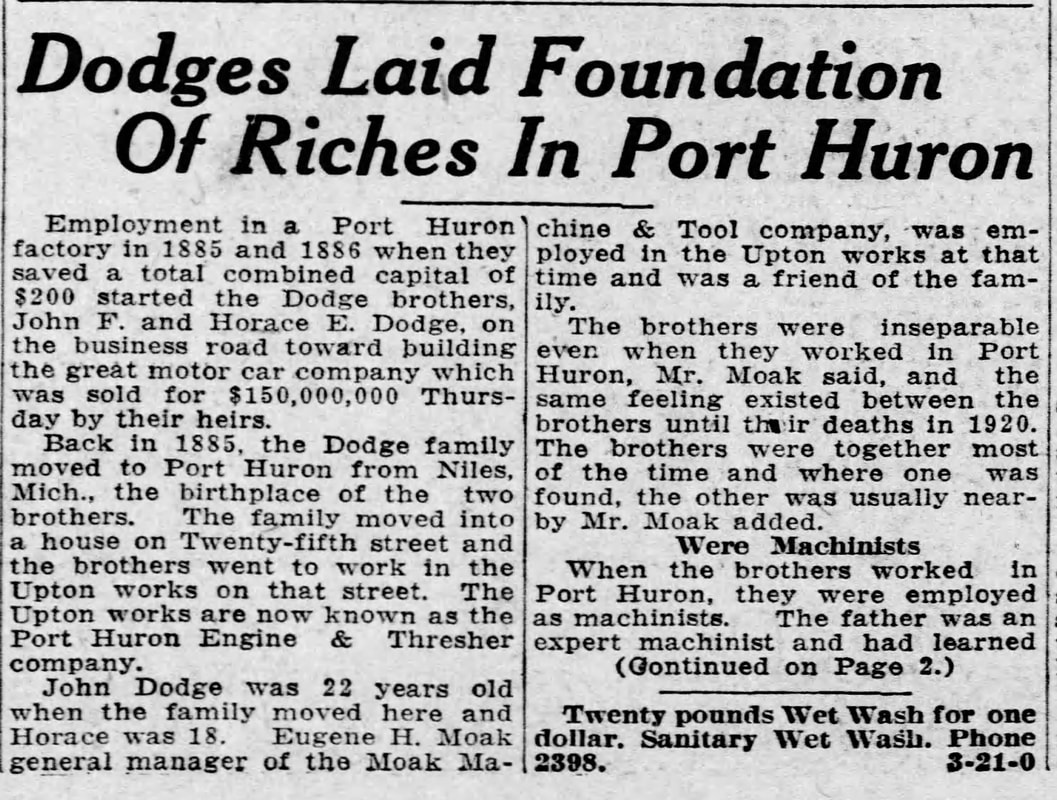 John had left Port Huron in the winter of 1886 and found work at the Murphy Iron Works in Detroit.  Horace joined him in the spring of 1887 and most likely the rest of the family moved as well.  Della, John and Horace's older sister, stayed behind and in February of 1892 married Uriah Eschbach who was the superintendent of Upton.  The 1888 Detroit Directory lists Daniel Dodge as a "machinist" living at 135 Porter Street in Detroit.  Also listed at the address are Maria, John, and Horace(listed as Dellie).  The map below shows the approximate house location... 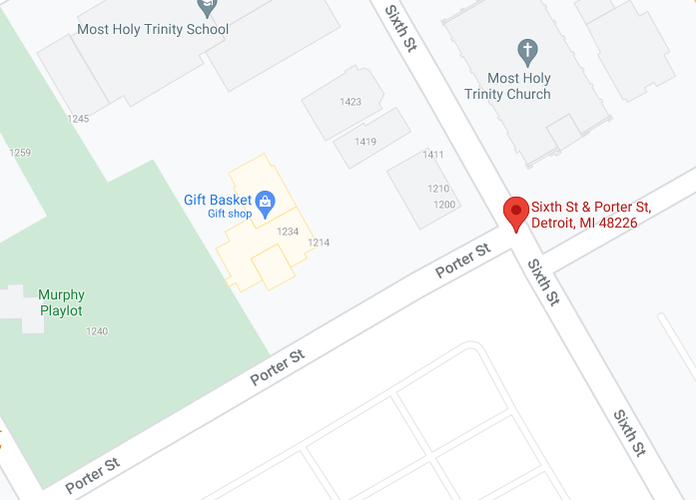 John and Horace worked at Murphy for about six years until John was diagnosed with tuberculosis.  He would spend several months off of work prompting Horace to work part-time for Leland, Faulconer & Norton.  Henry Leland was known for his precision machining learned in England which Horace benefitted from.  Leland would go on to work with investors who originally were backing Henry Ford.  They wanted Ford to build a car for the wealthy but Ford refused insisting on making the automobile affordable.  The investors left Ford and recruited Leland soon after and formed Cadillac in 1902.  Leland also formed Lincoln years later which he eventually sold to Ford... 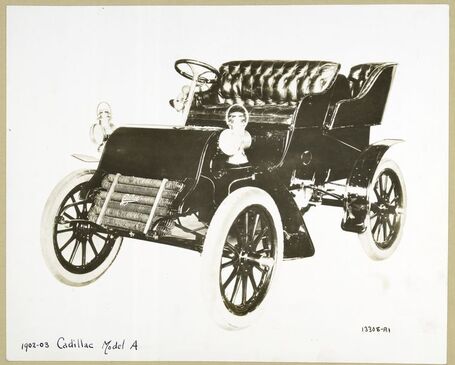 Photo Courtesy of the New York Public Library
In 1892 John and Horace took positions with the Dominion Typograph Company in Windsor.  It was here their skills became even more refined in precision parts which would enhance their reputation later on to produce automobiles.  The company changed their name to the Canadian Typograph Company around 1894 and by 1895 Horace had invented and patented a ball bearing to use in bicycles.  The brothers together with Fred Evans went into business together leasing out part of the plant to manufacture bicycles under the "E & D" name... 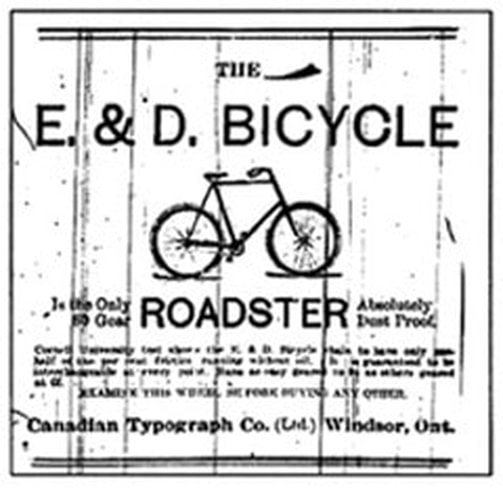 The Dodge Brothers continued producing bicycles until 1900 when several companies merged making the previous arrangement no longer beneficial.  They sold their interests and opened their own machine shop in Detroit at 133-137 Beaubien Street.

The brothers obtained contracts starting in 1901 to build parts for a few of the emerging vehicle manufacturers.  From 1900-1902 they built engines and transmissions for Ransom Olds.  Olds also had a contract with Henry Leland to produce engines.  Also in 1902, they realized their plant was not adequate for the new ventures and built a new plant on nearby Monroe Avenue later that year.  In 1903 they took a big gamble and signed a contract with Henry Ford before the Ford Motor Company was even formed.  They agreed to build 650 chassis and were the primary suppliers of Ford vehicles all the way until 1914.  When the Model "T" was produced the Dodge Brothers were responsible for about 60-65 percent of the parts...
In 1910 the brothers bought a thirty-acre parcel of land on the east side of Joseph Campau Avenue and built a factory there to keep up with the demands of the Ford contract.  John and Horace ultimately went into business for themselves introducing their own car on November 14th, 1914.  By 1920 there were 17,000 employees and the company was ranked fourth among the 108 car companies in production.  Unfortunately both brothers died of influenza in 1920 but their company lived on.  In 1928 Walter Chrysler bought the entire operation for almost 150 million dollars(2.2 billion today) making the Chrysler Corporation the third largest behind GM and Ford and thus the "Big 3" was born...
The ways that the Dodge Brothers gave back to their communities are too numerous to mention.  Their contributions include helping railroad workers in Niles to buy houses, the beginnings of the Detroit Symphony Orchestra, the birth of the A.P.B.A.(boat racing organization that brings hydroplanes to the Detroit River), and many other generous gifts.  Many of the Dodge Brothers artifacts including the prototype "E & D" bicycle, tools used in their work, personal vehicles, and more can be found at Meadowbrook Hall in Rochester, MI. 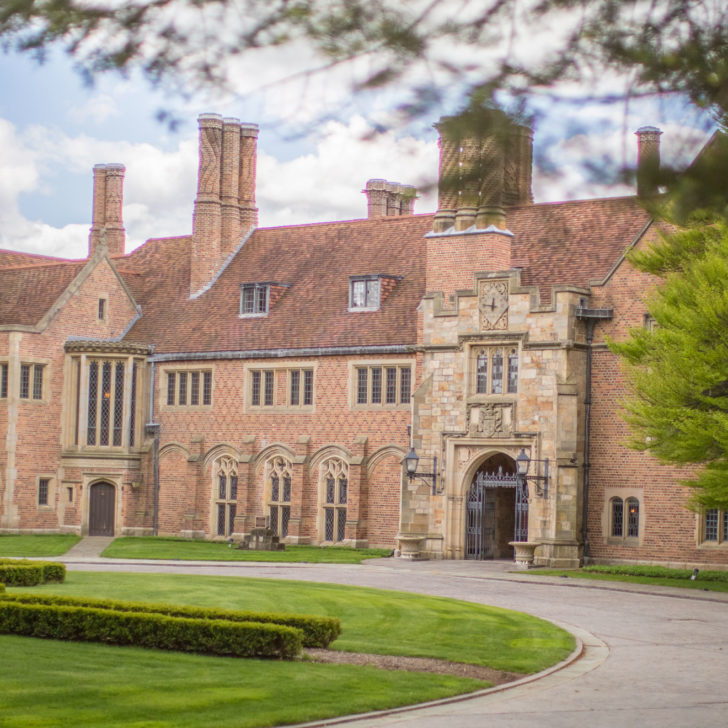