There are no known Wolverine vehicles known to exist.  There is one radiator and other various parts on display at the Manistee County Historical Museum
​Address: 425 River St., Manistee MI 49660
​Phone: (231) 723-5531
Website: https://www.manisteemuseum.org/ 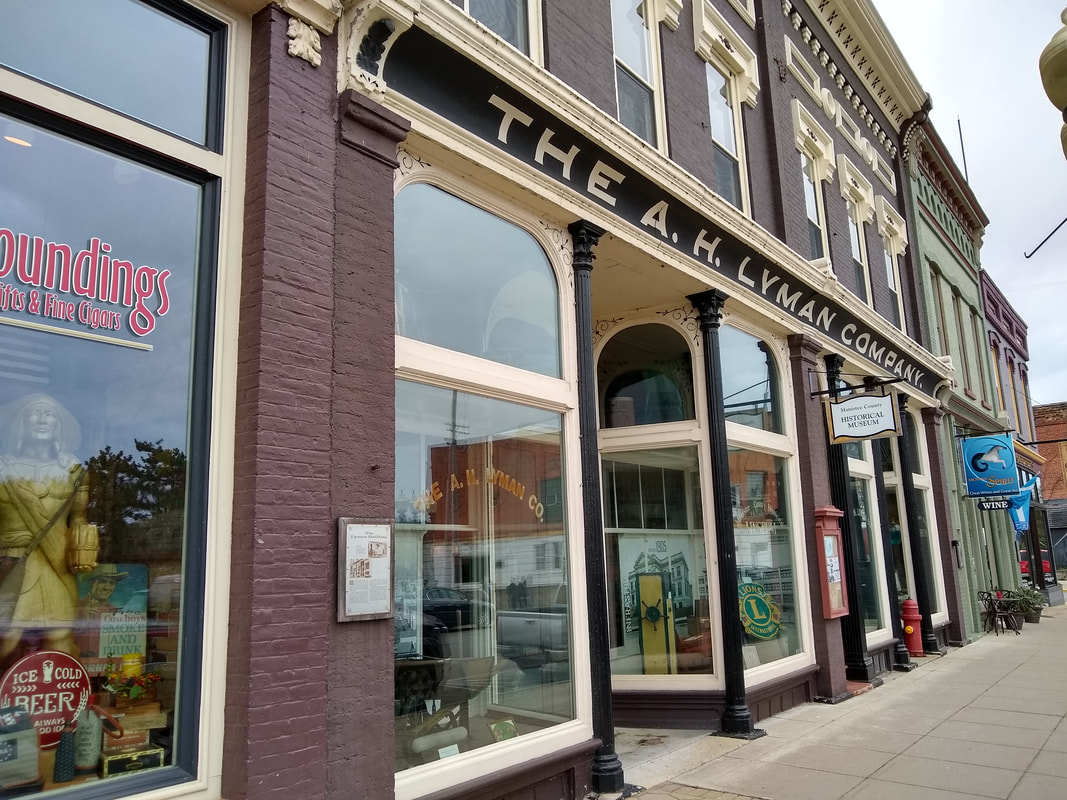 The factory location was at the corner of River and Smith inside the old Manistee Iron Works building or the "Bowie" building as it is known today.  The building is no longer standing.
Address: 284-286 River Street, Manistee MI

The Manistee Motor Car Company was part of the cyclecar craze from 1912 to 1917.  The company was originally an idea of the Anderson Electric & Manufacturing Company in Chicago but was sold to two local businessmen with the hopes of bringing industry and jobs to Northern Michigan.  The company was founded in March of 1912 and was to produce three models including a light delivery vehicle.  Ultimately the company never really got off the ground producing very few cars and went out of business almost exactly a year later.

Charles Elmendorf started his life in Manistee as the factory manager of the Manistee Manufacturing Company in 1898.  By 1903 he would take over the company putting his former furniture design and building skills to work...
George M. Burr was a prominent banker and businessman in Manistee holding the title of the Secretary and Treasurer of the manufacturing company as well as treasurer of the Manistee Building & Loan...

Elmendorf and Burr decided to try their hand at the auto business after visiting and investigating the Anderson Electric & Manufacturing Company in Chicago in early 1912.  The company had developed 3 low priced automobiles and felt they were poised to take over the low end of the automobile market.  Elmendorf decided that he could bring auto manufacturing to Manistee and with it many jobs.  He purchased all of the equipment, dies, blueprints, the 3 prototype vehicles, and 20 vehicles that were near completion for the price of $13,312.00 and had all of it shipped to Manistee.  Needless to say the town was excited to possibly become the next Detroit or Flint...

The Manistee Motor Company was incorporated on March 2nd, 1912...
$51,000 in stock was the initial investment in the company.  At least $10,000 went to the Anderson Electric stockholders for the investment made to develop the 3 prototypes...

The factory site would be the building known as the "Bowie" building which housed the original Manistee Iron Works founded in 1871 by John Bowie and Nels Johnson.  Bowie passed away in 1898 and records show his sister Mary as the landlord.  The rent payment was $40 a mont or about $1200 in 2022...
The building was formerly occupied by some other automobile inventors who also lived in Manistee.  Otto and Henry Brugman had been building vehicles since 1902 but later were primarily repairmen and agents for several different brands.  They moved into 475 River around the same time...
The cars that were to be built were in fact 3 different models....
The company was ready to go and the checks started to be written.  A number of interesting check stubs are listed below.  The first is the stub for the initial check written by the company....a purchase from the Twain Manufacturing Company on March 26th, 1912... 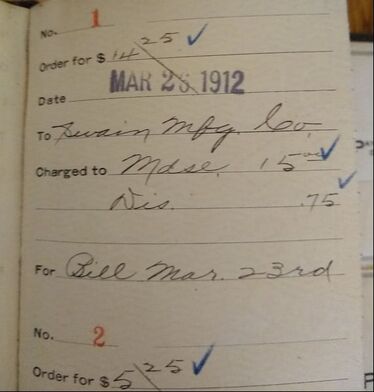 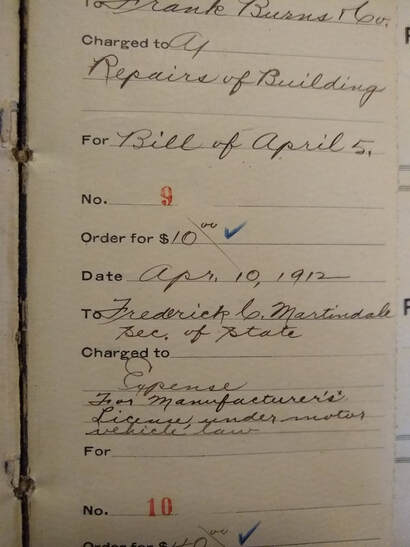 This check stub shows the company buying the manufacturer plate.  This enabled any vehicle to go out from the plant to be test driven.  The practice still goes on today by every automobile manufacturer with each plate having an "M" printed on it...
This stub is written to the A.H. Lyman Company for office supplies.  The museum is housed inside this original building... 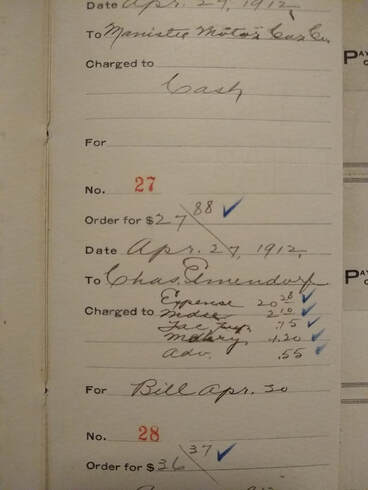 This check is made out to Charles Elmendorf himself for expenses...
Machinery was bought and installed throughout April...
Just like the "Autoette" and "Manistee", many car and truck companies of the day were primarily assemblers buying their parts from various manufacturers and selling the product with their own name plate...
Parts cane from the Ideal Sheet Metal Works of Chicago including:

Other companies that supplied parts included:
The motors were 10 horsepower, four cycle, and an upright cast block.  A motor believed to be from one of the vehicles as well as a radiator are on display at the museum... 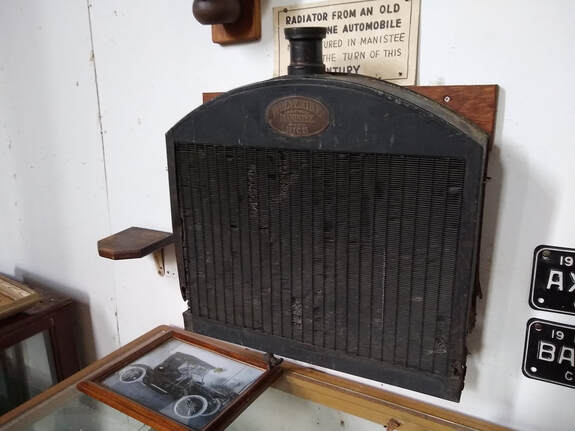 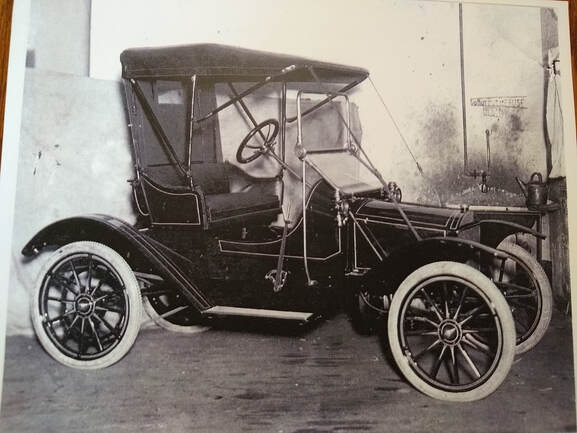 The first car was said to have been ordered by Dr. L.S. Ramsdell...

Three weeks later a total of 15 model "C" cars were to be completed.  It is not clear whether 14 of those were ever produced but one was completed and shipped to Chicago sometime in mid to late September.  By the end of the year production had ceased.
Twenty cars were possibly produced(or finished) from the initial purchase from Anderson Electric and 15 more could have been made in Manistee.  The company books that were found showed income from 3 vehicles sold:

One of the vehicles sat under the South Street Bridge in Manistee abandoned for years...which one it was nobody currently knows.  According to the records 15% of the original investment was returned to the stockholders.  After the liquidation of the machinery, office equipment, and spare parts, the company ended up with a $400 loss.  It was several years before the books were finally closed.  The official end to the Manistee Motor Car Company came at a meeting at the Manistee Board of Trade on March 27th, 1913.  What seemed like a sure thing turned out to be short lived.  The bottom line was the cars wouldn't sell and the factory closed.
An interesting note is the car was considered an early cycle car(at least models "A" and "B"/Autoettes were).  The real window for interest in cycle cars took off in 1912 and ended around 1917.  Perhaps the company saved itself from an even bigger loss as the cyclecar turned out to be mostly a fad...

Charles Elmendorf and George M. Burr continued on in their furniture business and other endeavors with Elmendorf running the company for the next 40+ years.  There are no other known efforts associated with the two men regarding the automobile business...