The track closed and has been private property since 1978.
Address: 6170 Meldrum Rd.(Approximate) 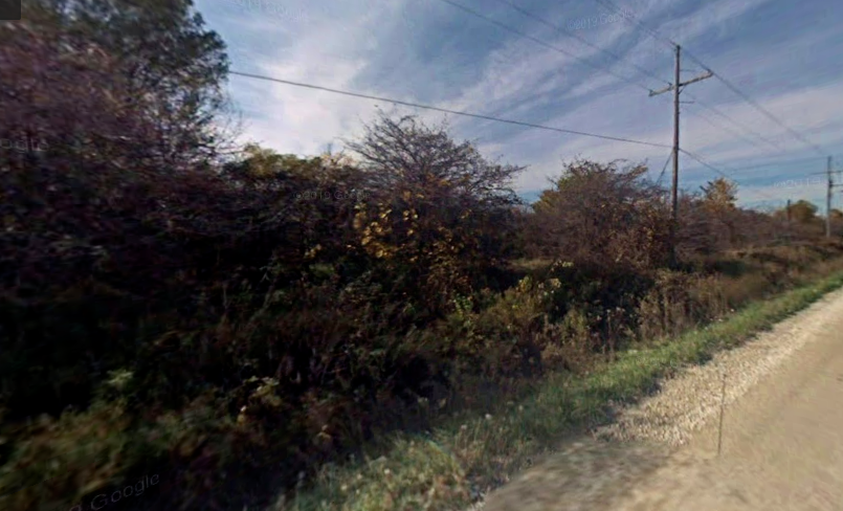 The Chrysler Plant that made the 426 Hemi engine for not only road cars but also drag racing cars and NASCAR was located in nearby Marysville.  It was also the site of the Wills Ste. Claire factory.  C. Harold Wills was chief engineer for Henry Ford for many years helping design vehicles and designed the letters used in the Ford Logo.
Address:  940 Huron Blvd., Marysville, MI 48040 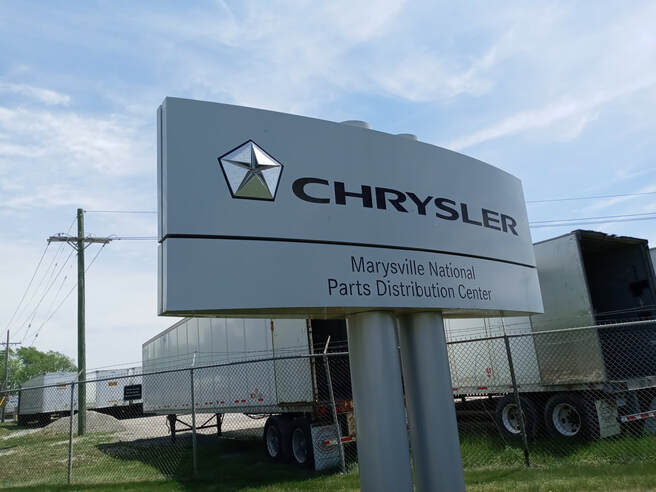 The Motor City Modified Auto Club became the first hot rod club in Michigan and formed in 1948.  By 1951 they had formed and now managed the Michigan Hot Rod Association(MHRA).
The M.H.R.A. wanted to follow in the footsteps of the N.H.R.A. and bring drag racing to a track.  In order to raise money for the track, the idea for a hot rod and custom car show was formed.  On January 31st, 1953 at the University of Detroit Memorial Building the Autorama was born. 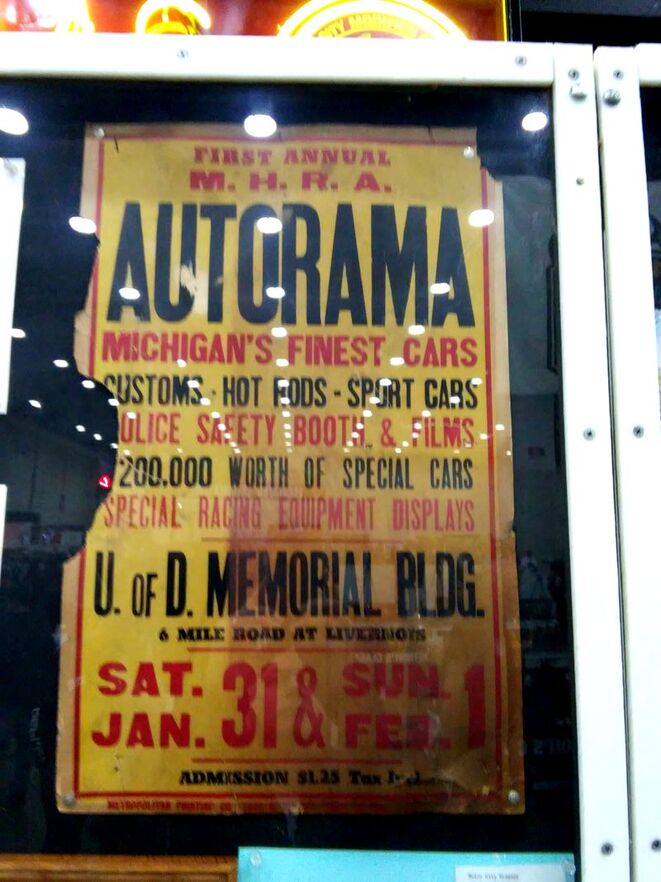 In order to get funding on a fast-track Don Ridler was signed to a 5 year contract to promote the Autorama in both newspapers and television.  Don Ridler's legacy still survives today with his name adorning the highest honor in custom car shows.  The award known as the "Ridler Award" has been awarded every year since 1964. 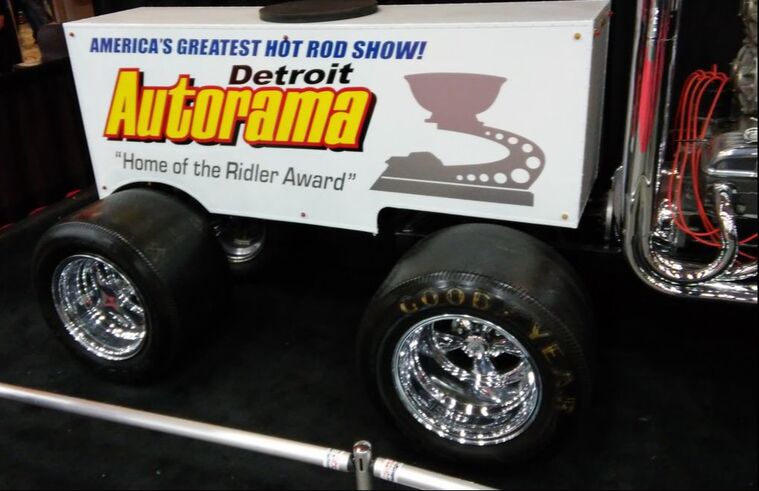 The success of Ridler's efforts allowed the purchase of 42 acres at 26 Mile and Meldrum Road in Ira Township and the M.H.R.A. Dragway was born.  Loans were taken out to fund an additional 40 acres west of the strip for a runoff.  It was Michigan's first paved dragstrip and opened on the weekend of May 30th to June 1st in 1957.
Autorama legend Bob Laviree Sr. managed the track for a short time before turning all his attention to car show promotion.  This article from May of 1958 shows Laviree as the manager... 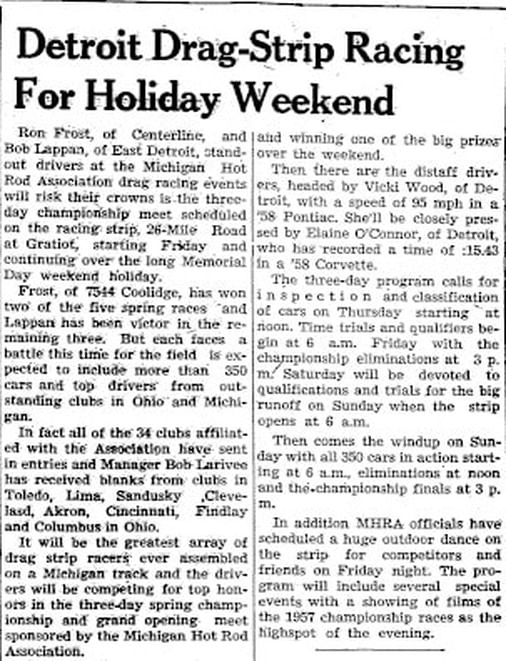 Gil Kohn who eventually became the track's owner opened the Detroit Dragway in 1959.  This article talks of the "new dragway" which was another that Kohn would own and run...

New drag strips and race tracks were popping up all over Michigan and that meant financial challenges for the track... 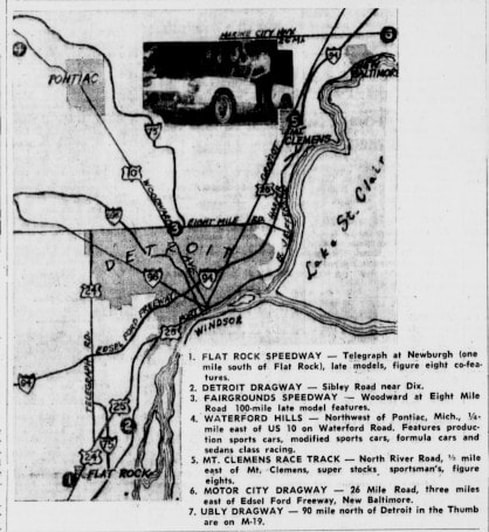 In 1963 John Bloom and Leo Martin leased the facility from the M.H.R.A. and things turned around.  The track started to focus on family oriented entertainment and the name changed in 1963 to International Raceway Park... 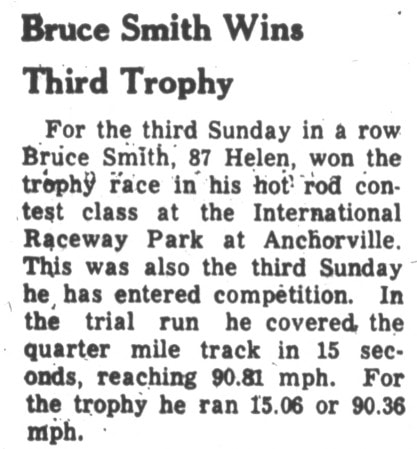 In 1965 the name was changed again to Motor City Dragway... 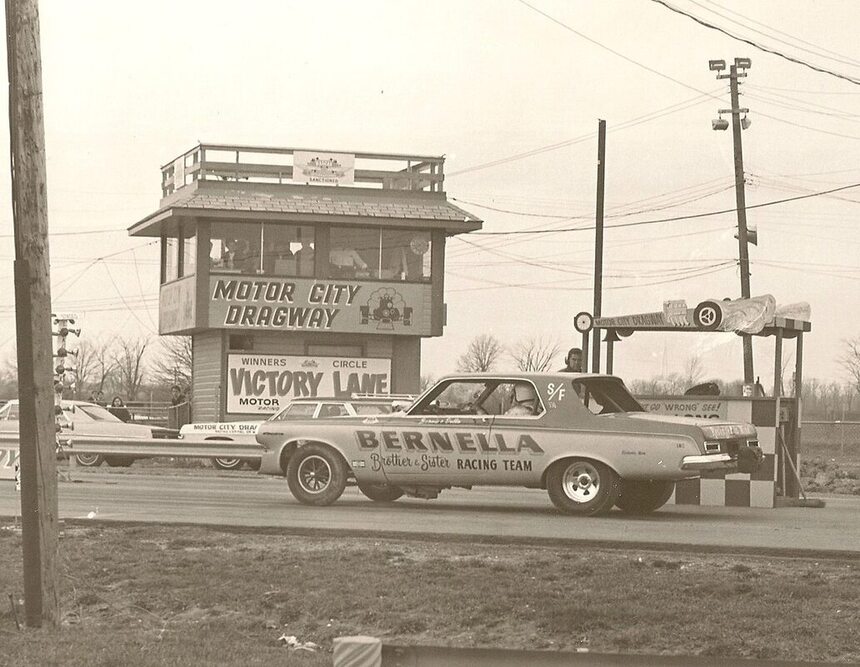 Photo Courtesy of the Marine City Pride and Heritage Museum
The track was used by a group of engineers from Chrysler for testing called the "Ramchargers".  Eventually other car manufacturers did the same...

Also in 1965, NASCAR got into the drag racing business for a short time and Motor City Dragway was the first track sanctioned... 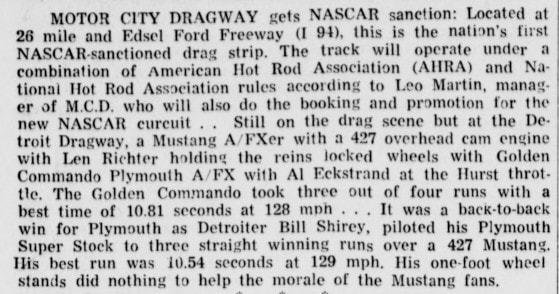 Photo courtesy of the Marine City Pride and Heritage Museum
The famed drag racer "Wild Bill" Shrewsberry was the driver for the first year in the famed "Hemi Under Glass" but he also piloted the Batmobile #4 which was used for drag racing exhibitions.  According to a saved radio commercial from 1966, Motor City Dragway was the first run for the famed George Barris car. 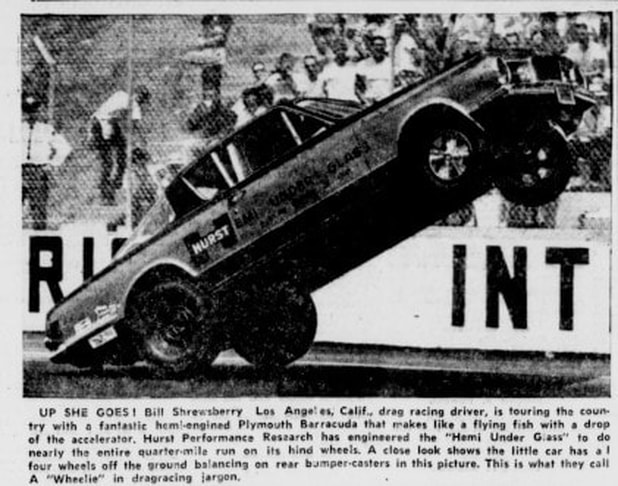 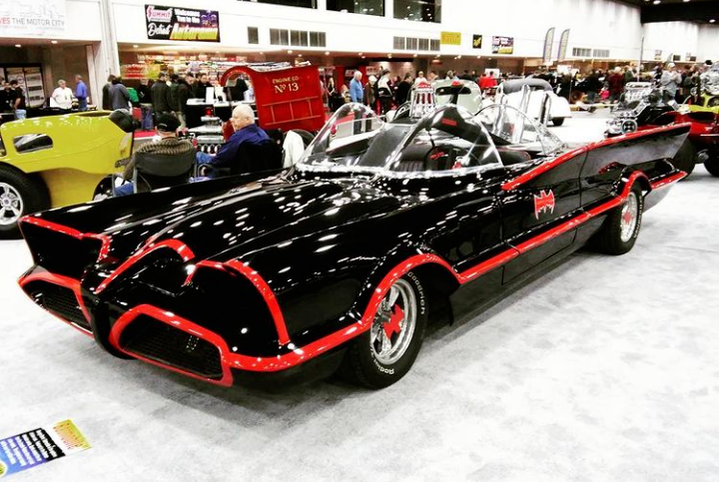 In nearby Marysville, the 426 Hemi was being built not only for the production cars but also for drag racing and NASCAR...
In the mid 60's the entire car craze was just getting started with legendary names like Don Yenko and Carrol Shelby.  Prototypes were being built and new models were going racing... 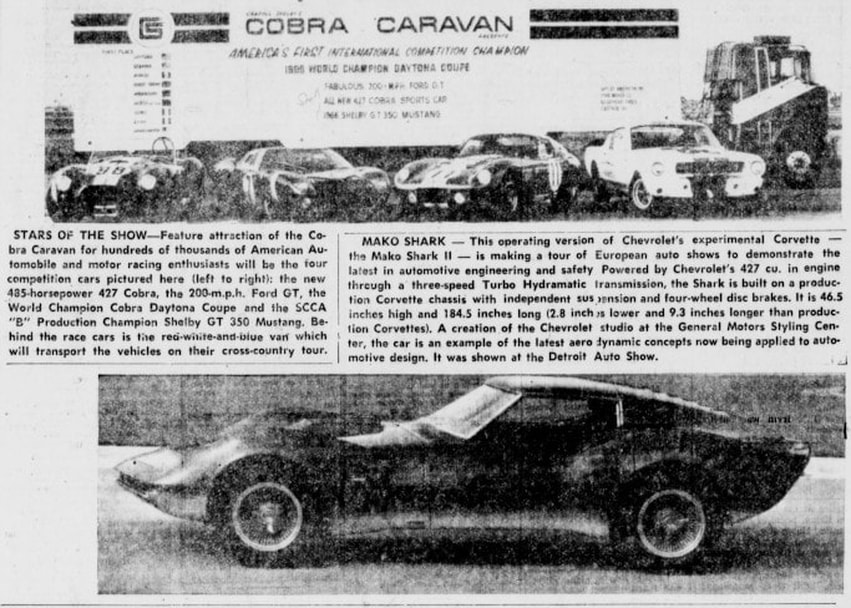 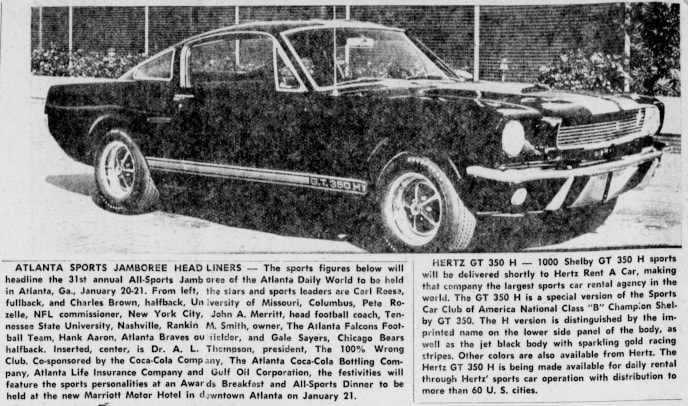 On October 22nd, 1968 the MHRA sold the track to Gil Kohn for $85.000.  Gil also ran a track in Long Island with Ed Eaton who is credited with inventing the modern racing christmas tree.  The track continued operation until 1978 when it finally closed down due to high gas prices and other problems. 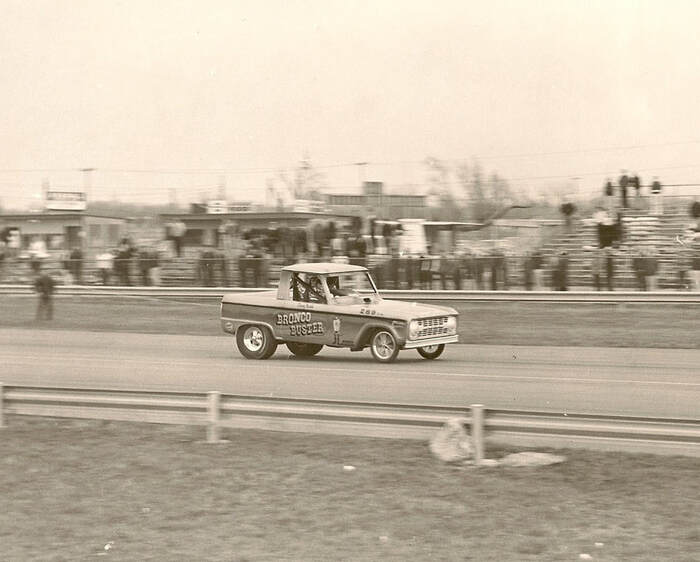 Many artifacts are still around if you can find them.  Members of the M.H.R.A. hope to be able to purchase the land at some point to construct a museum and host car shows. 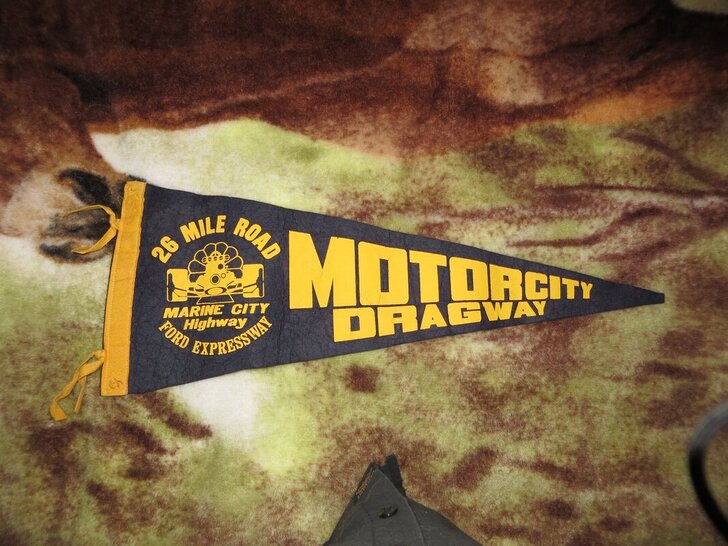