Years In Operation:  1914-1915
Models Built: M.P.M.
Approximate Number of Cars Built: 8-10
​Factory Address: West High Street on the east side of the railroad tracks
​Officers of the Company:

There are no known examples of the M.P.M. known to exist although 8-10 were sold.
Not a lot is known about the M.P.M. but you can find out more about the Transport truck built in Mount Pleasant or more about the city's history by visiting the Isabella County Historical Society.
Website: https://www.facebook.com/pages/category/Community-Organization/Isabella-County-Historical-Society-2019635561587668/
The factory is no longer standing and the property is occupied by United Apartments and a few houses.
​Address: Approximately 400 West High Street, Mount Pleasant, MI 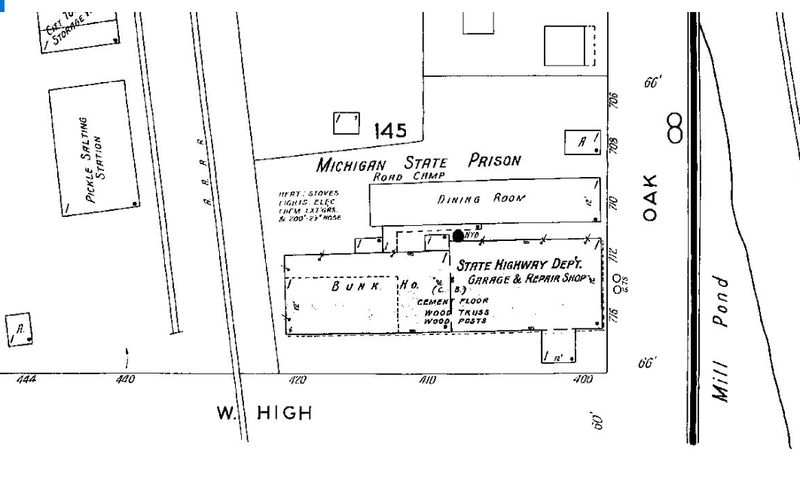 This article helps to verify the location of the factory... 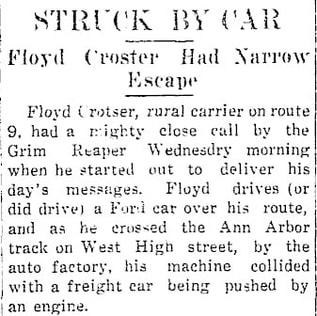 Louis J. Lampke, who was the engineer and designer of the vehicle, came from New Jersey seeking to establish an auto factory as shown in this article from the Isabella County Enterprise October 9th, 1914.  Mr. Lampke reportedly was involved with 2 other car companies before this including Lion in Adrian, MI and Palmer-Singer in New York. 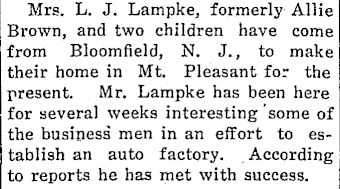 A contest was held with a grand prize of $5.00 to name the car and was won by Wells Brown.  The name M.P.M. was chosen which stood for Mount Pleasant, MI.  This article is from January 1st, 1915... 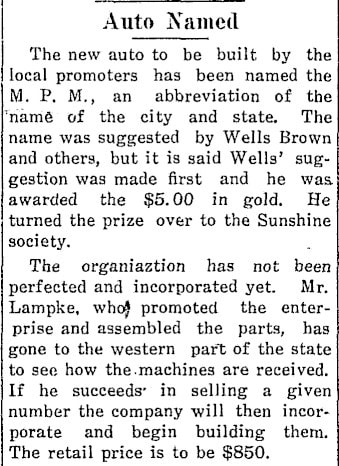 The Mount Pleasant Motor Company was officially incorporated the week of January 22nd, 1915. with the first car being built some time in late 1914.  The prototype was said to be made and moved between 3 blacksmith shops to hide it from the public.  The officers were named including the mayor, an attorney, and a member of the Michigan State Legislature.  Here is an article from The Clare Sentinel Jan 22nd, 1915 and The Horseless Age, Volume 35 1915... 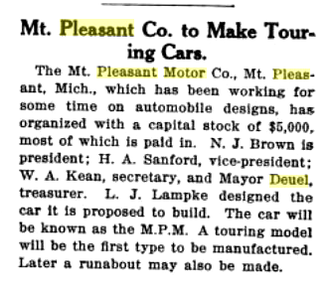 This article from January 22nd, 1915 shows the immediate pitch to sell cars... 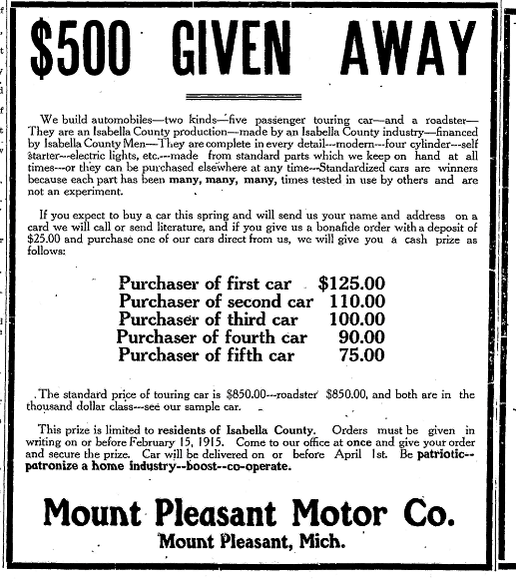 On February 19th, 1915, this article from the Isabella County Enterprise makes another pitch at the quality of the car and encourages people to buy local...
Work on the cars was set to begin March 1st... 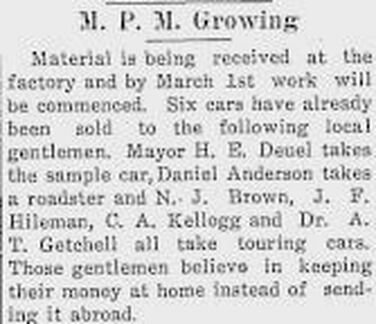 Purchasers of the vehicle were some prominent people in the community... 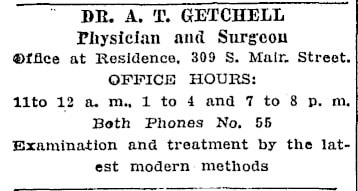 The factory was added on to according to these articles from April, 1915... 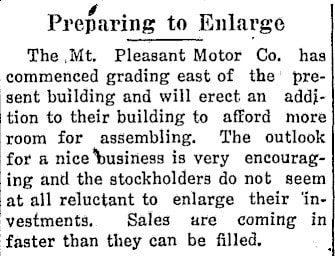 Work on the expansion was moving right along according to this article from May 14th, 1915.  The company was gearing up for bigger production and was seeking a mechanic from Detroit for assembly... 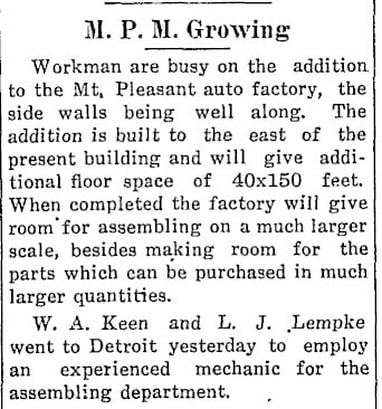 This ad from September 3rd, 1915, shows the slogan of the company which was "The Quality Car".  The main pitch of the company as stated earlier in the year was the car was to be made with proven parts.

One of the reported 5 places to sell the M.P.M. was Floyd Johnson who had a dealership in town... 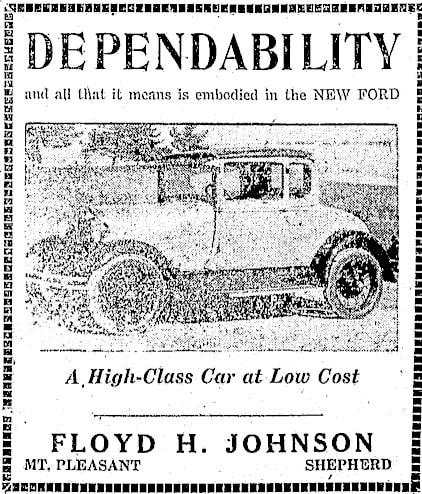 The company took the first steps to be reorganized during a meeting on September 14th according to this article from September 17th, 1915.  This article also shows 2 more cars being sold at the Isabella County Fair... 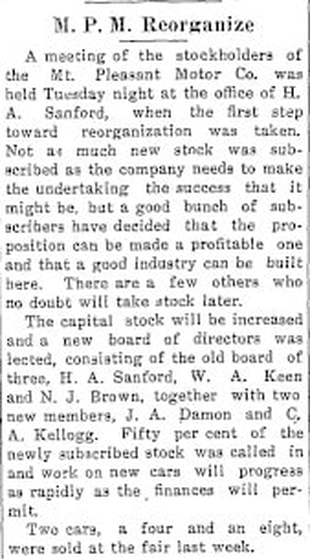 This report from the Department of Labor shows that as of October 1915 the company only had 3 total employees...

It wasn't long until the company folded.  There was an attempt to move it to Alma or Saginaw but there were no takers. Saginaw, however, was interested in Lampke himself.  He went on to start another company that made the Yale 8 which appears to look much like the M.P.M.  The factory for the Yale 8 was located on the corner of Jefferson and Atwater. 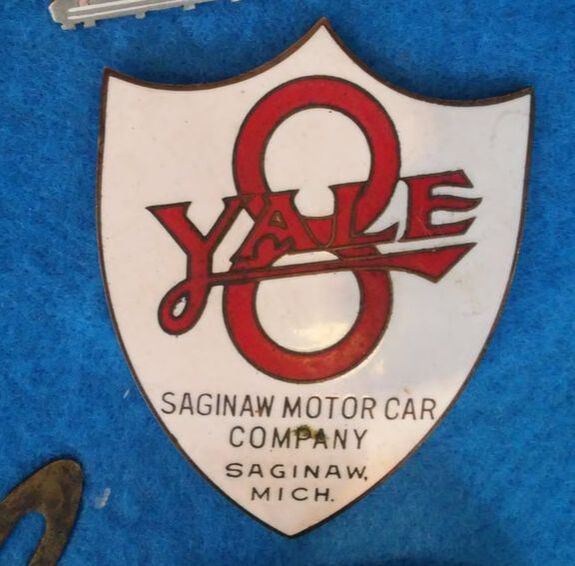