what can I see today? 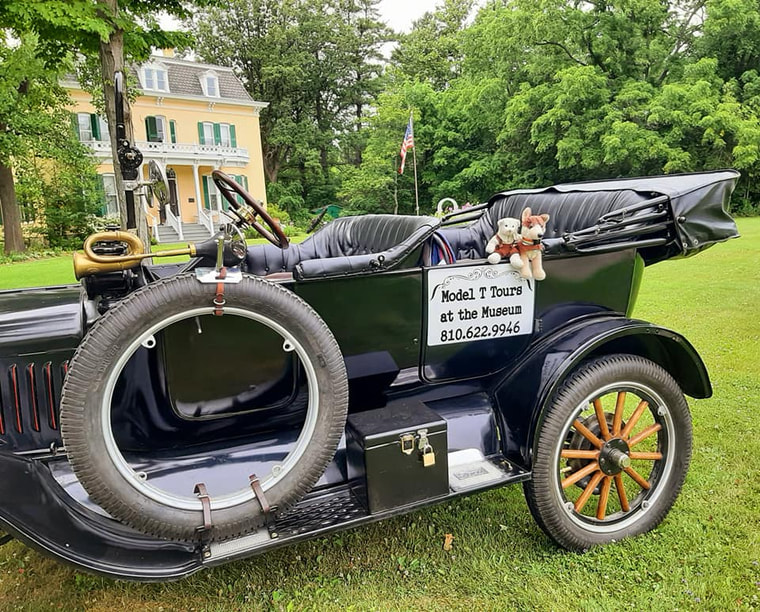 The company closed many years ago but the location still contains the original buildings.
Address:  2525 Lakeshore Rd., Port Sanilac, MI

National Coach Engineering Ltd. was a company in Port Sanilac, MI which specialized in car customization and limo construction.  The company was founded by Gary Forbis on November 18th, 1977.  Forbis had been customizing vehicles by word of mouth since 1971 before his business ever took off.  Harry Wedyke, who was the factory manager, is pictured with Forbis below... 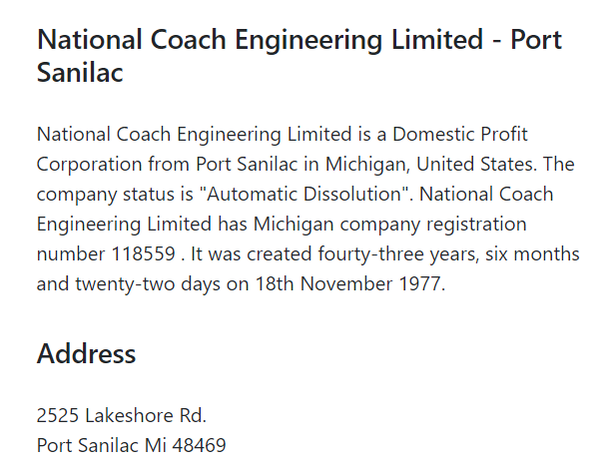 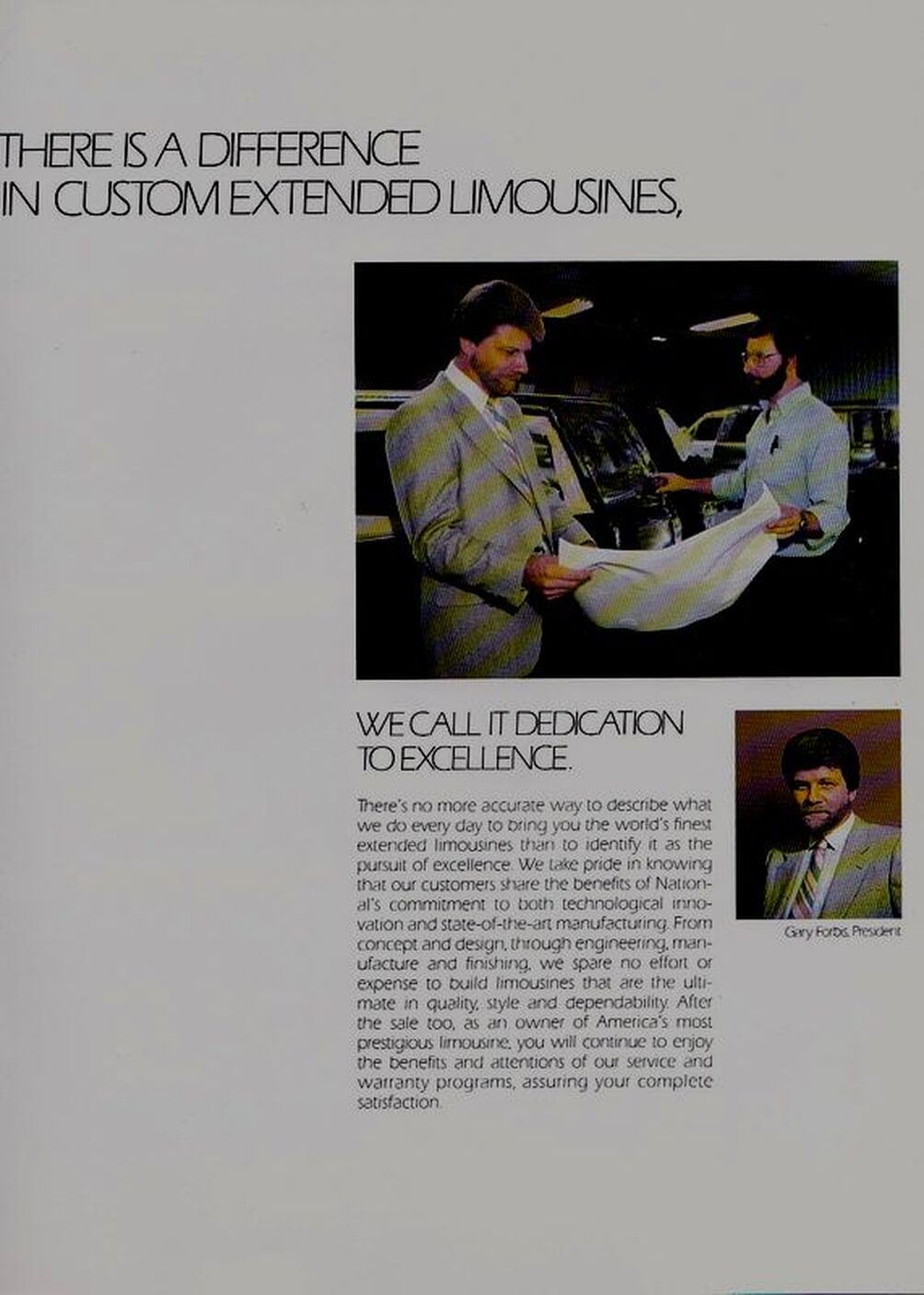 The factory was one of the few that did conversions on the Firebird, Trans-Am, Camaro and other vehicles as well as custom coach work. 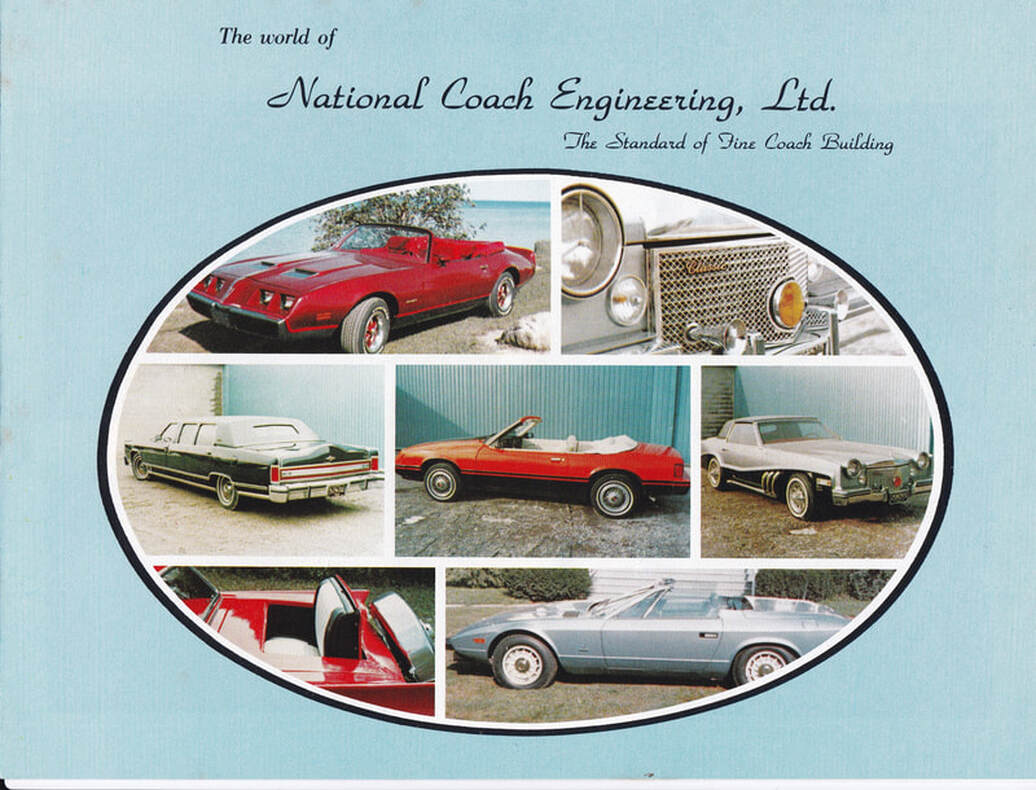 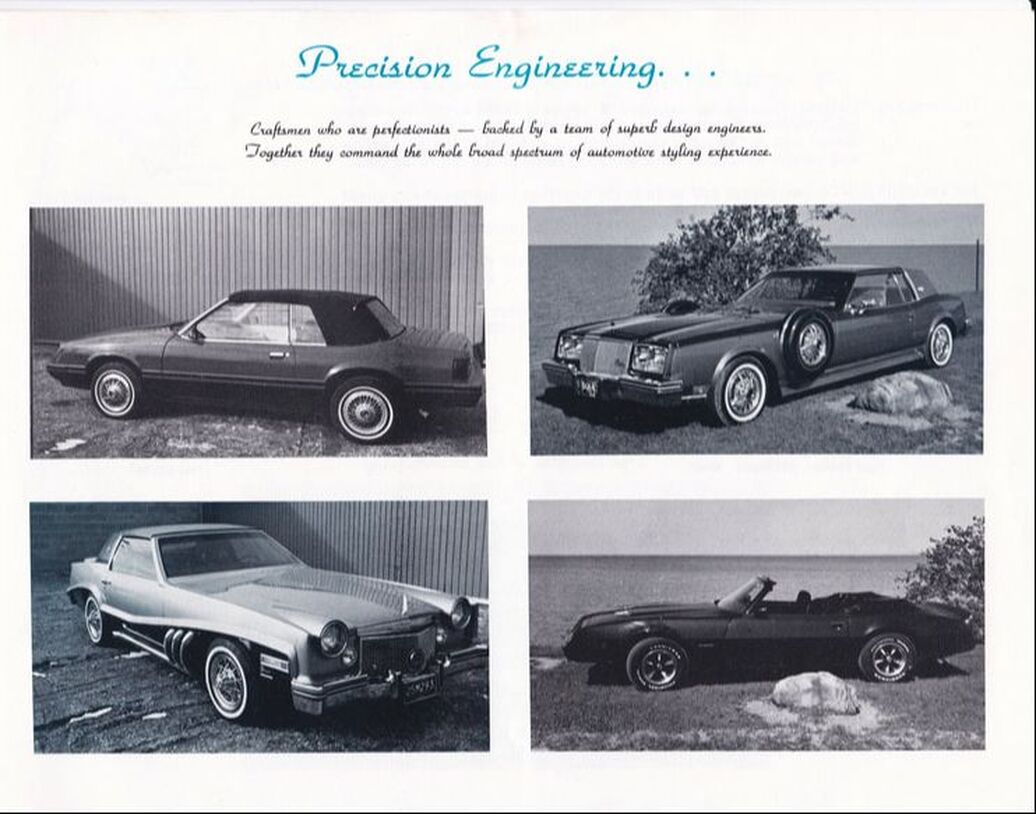 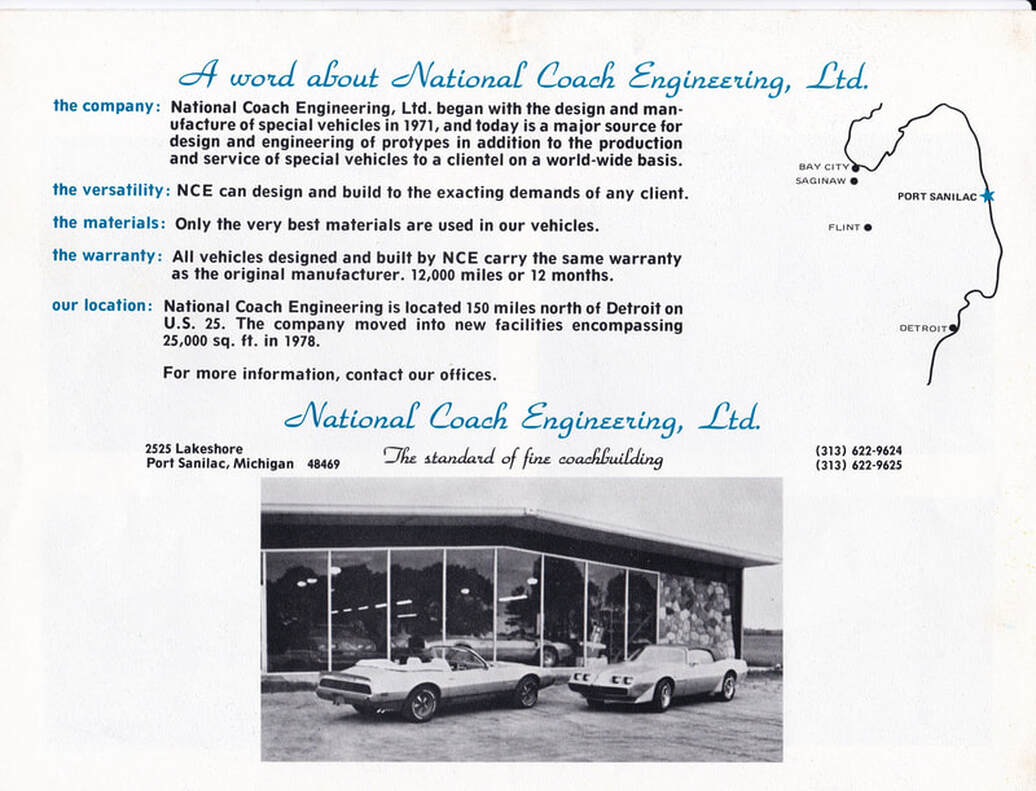 This article was written in Motor Trend in August of 1979 discussing how Gary along with a few others started the convertible project... 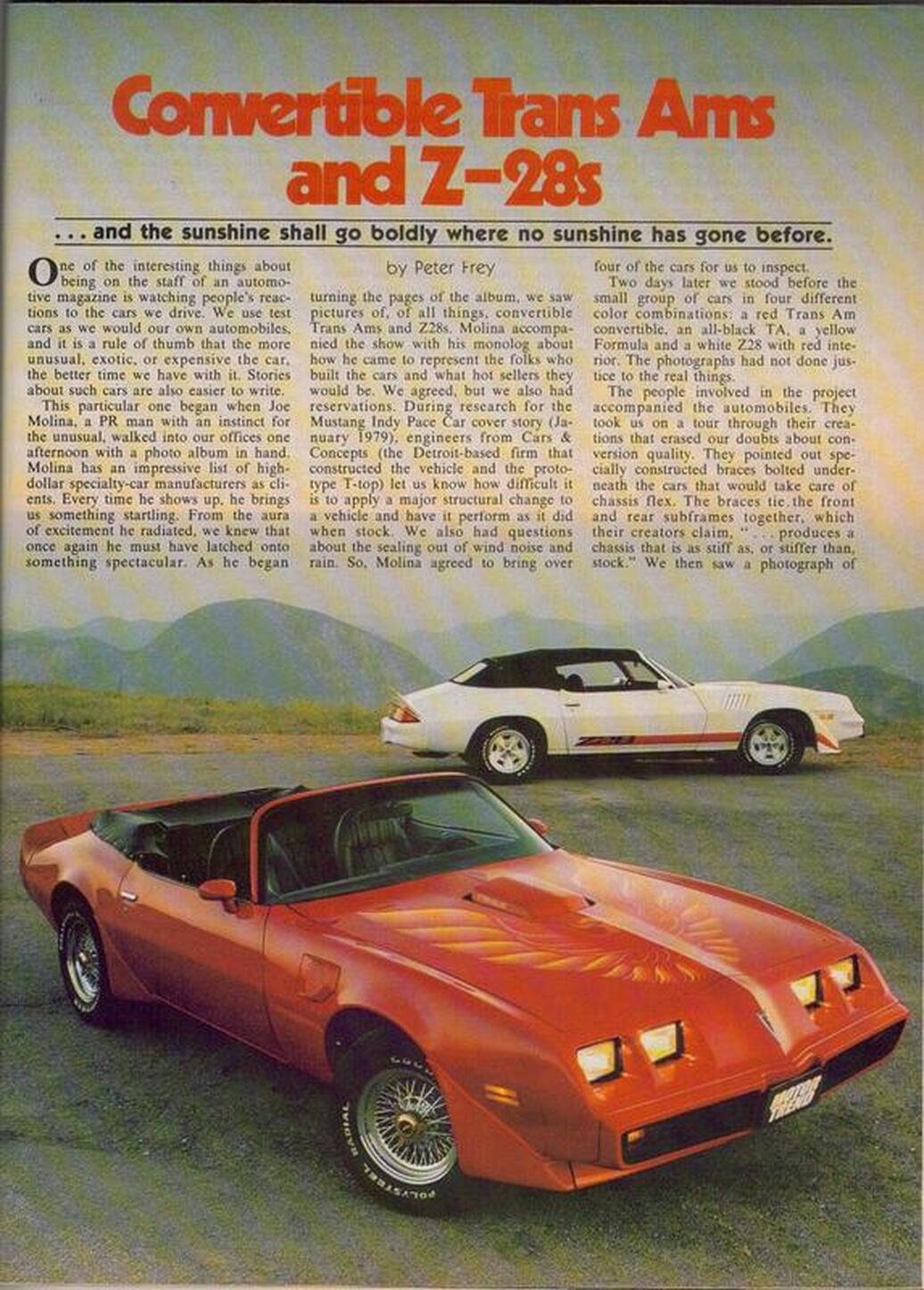 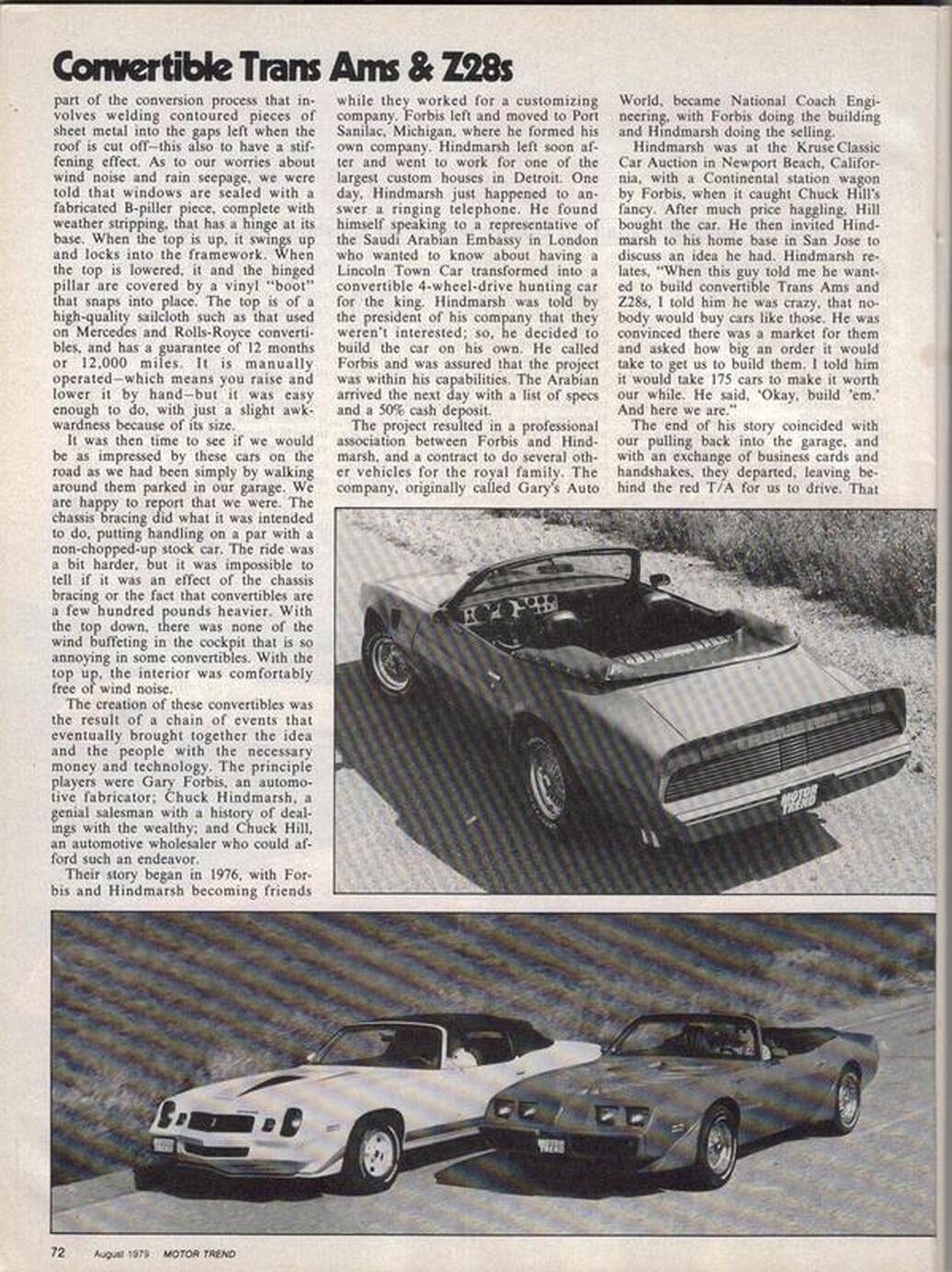 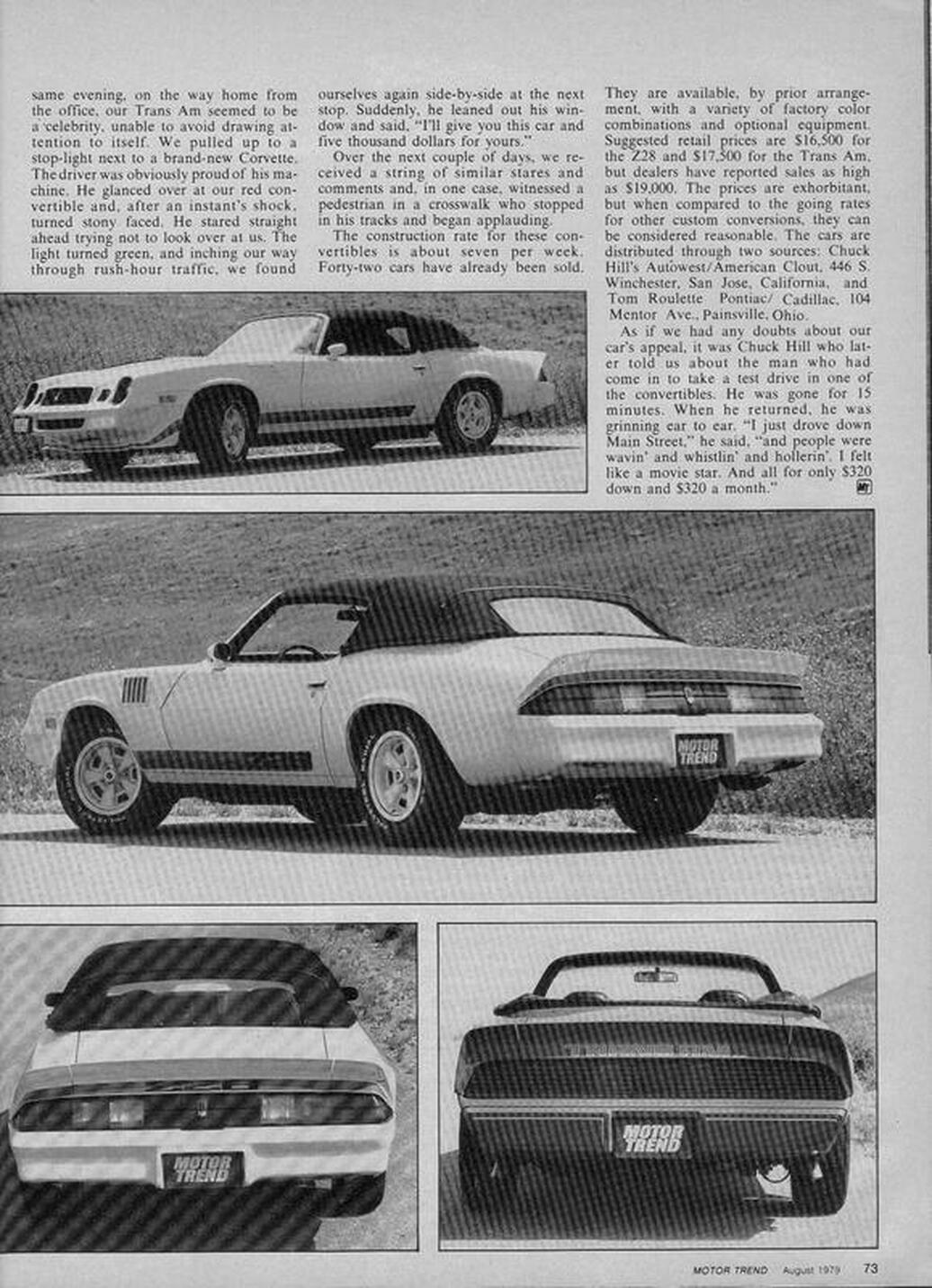 Limo building and accesories were the major business of the company...
This article was written in Heritage Magazine, April of 1989 and describes the Forbis family rise to car building and customizing prominence...
A time when manufacturers stopped making convertibles and the growing popularity of limousines is what ultimately prompted the Forbis family into their business... 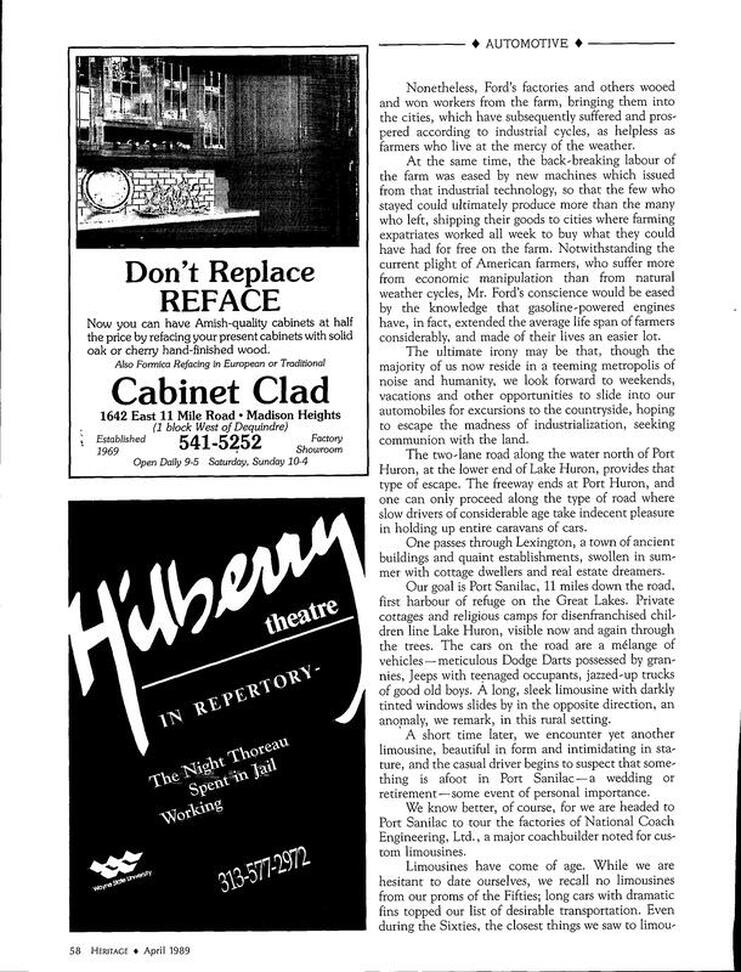 Gary started in the tool & die business in Mt. Clemens where he and wife Cindy lived.  Their house was broken into and they got fed up, flipped a coin, and ended up buying a gas station in Port Sanilac in 1977... 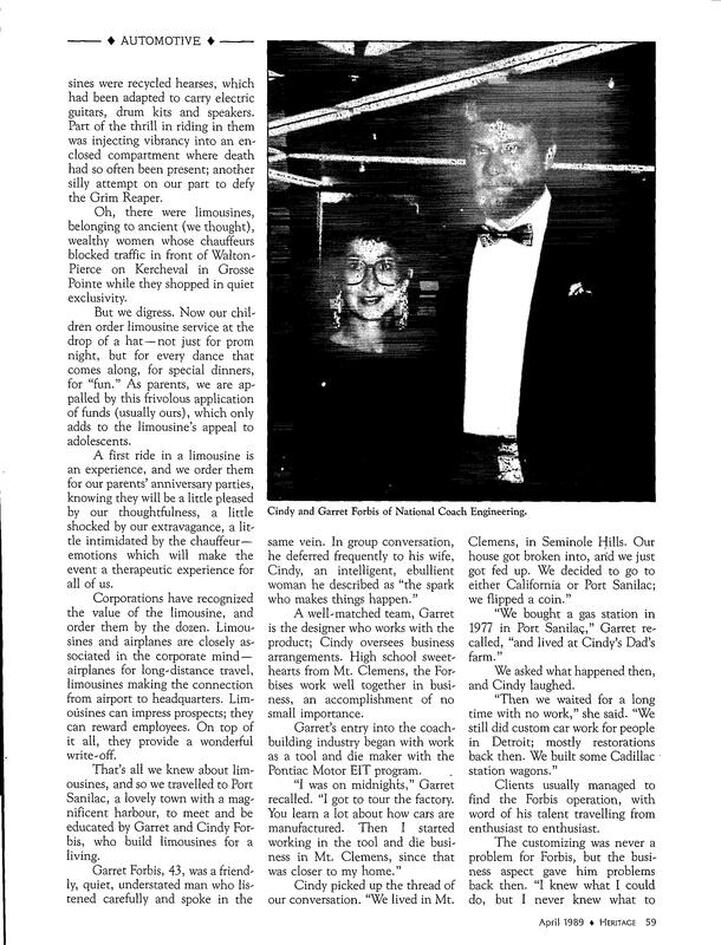 In the early days the Forbis family struggled to make the business work and walked away from their business for one year in 1979.  Gary went to work for someone else but it wasn't satisfying.  His entrepreneurial spirit and belief in his talent enabled him to get back in business for himself.  One aspect of his stint at making convertibles for dealers was it was his work but not his name on it except for a small badge that was hidden in the door jam... 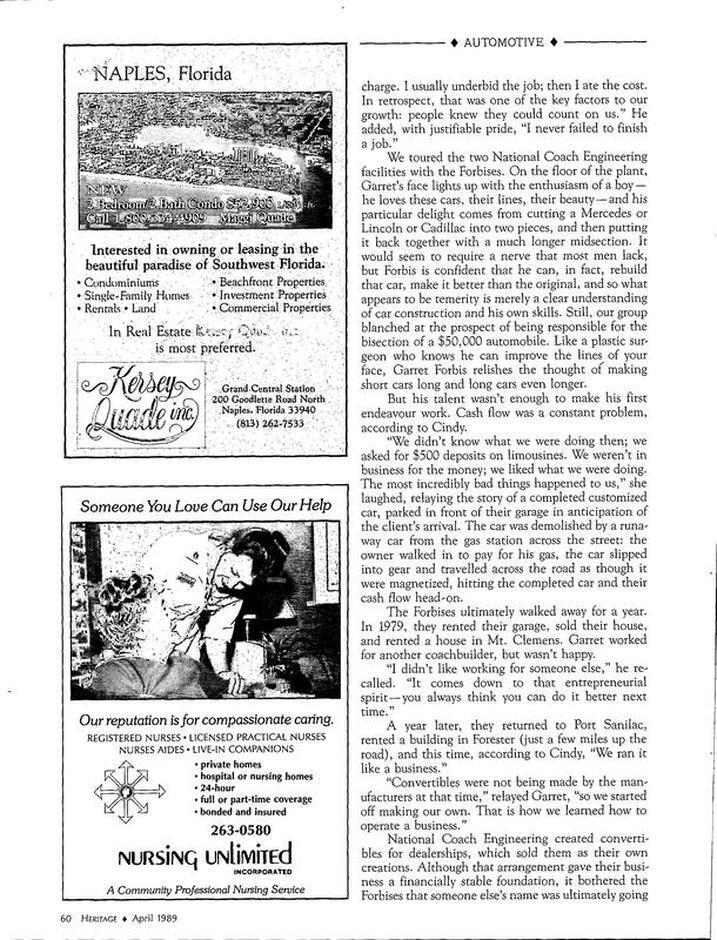 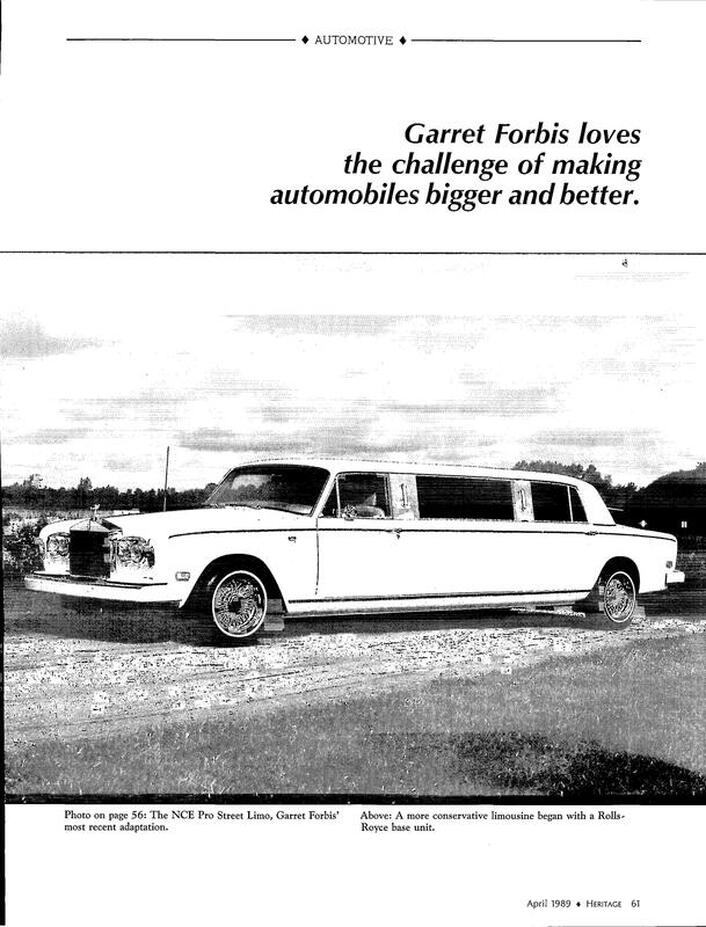 NCE had two plants that made vehicles and parts including interiors.  The concentration of the business was on convertibles at one point but had to shift to limousines when manufacturers starting producing them again after a multi-year break.  Limousine output was about five per week and they were made for celebrities and businesses alike... 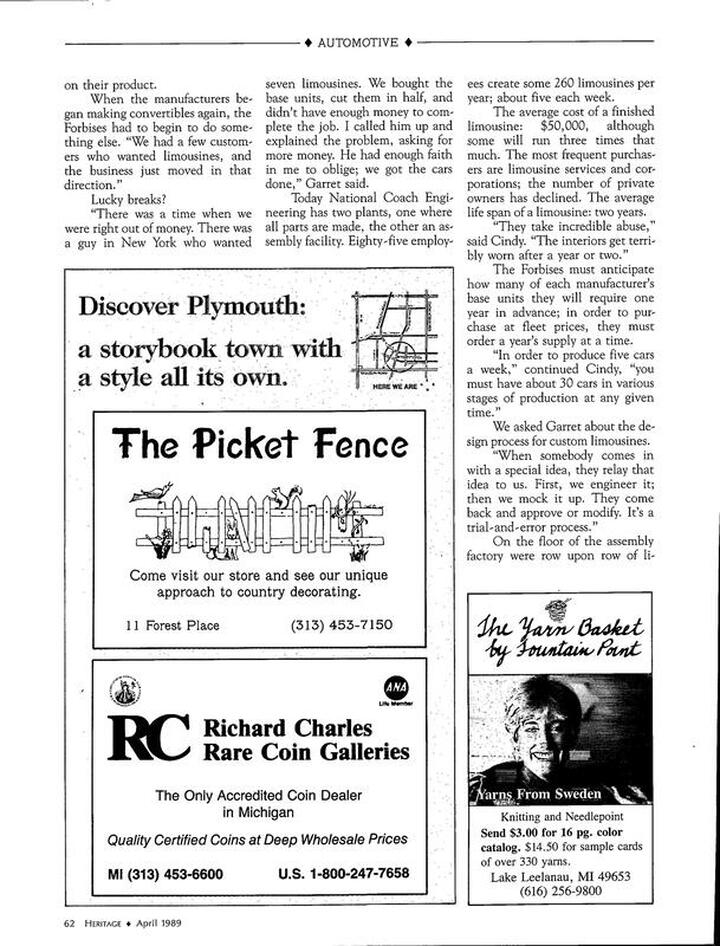 Gary was always coming up with something new to stay ahead of the competition.  Whether it was a Rolls-Royce with a Chevy motor, a crazy-custom limo, or a street rod, the Forbis family stayed in business not for money but for the love of working on and customizing vehicles... 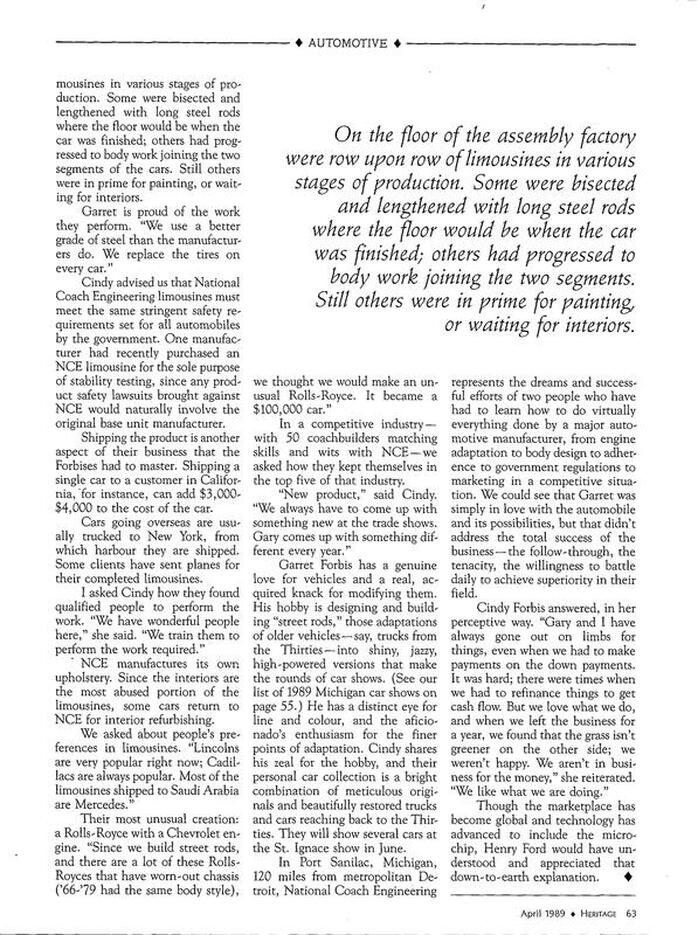 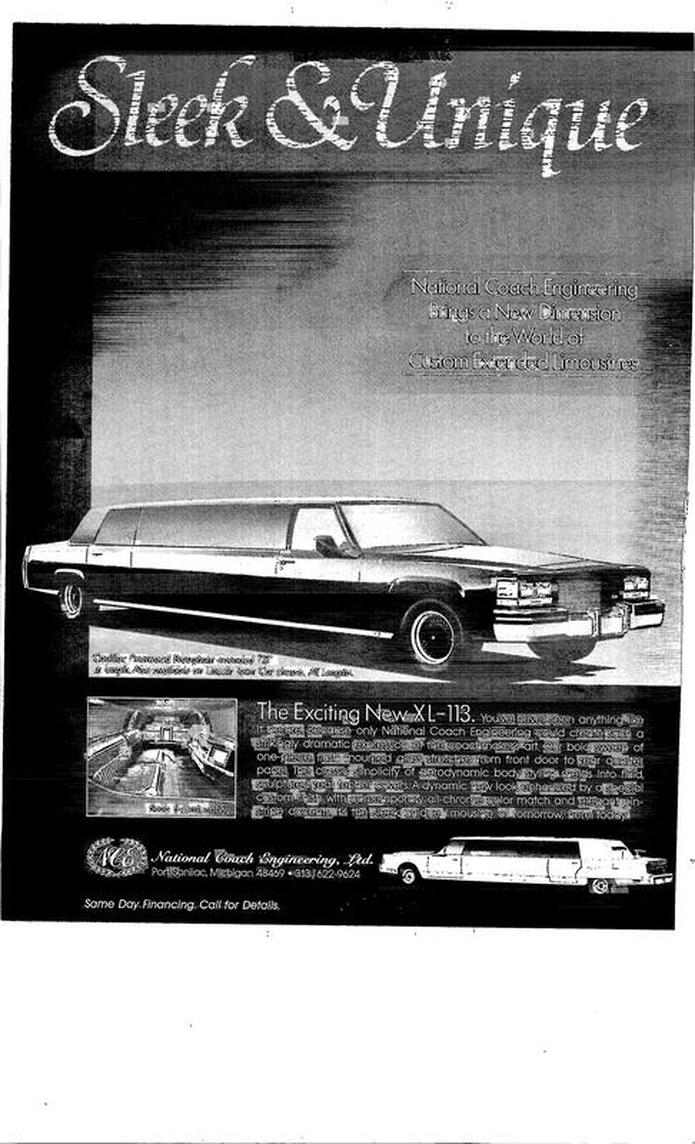 The custom limo in the article is seen here on bangshift.com and is said to have been built in 1984...
The company was officially dissolved on July 15th, 1998.  The cars that NCE made are highly sought after even to this day.  Gary Forbis unfortunately passed away in October of 2007 but his talented staff and company legacy lives on.