There are 2 known examples of Napoleon trucks known to exist and a handful of cars.  One of the trucks is owned by Hagerty Insurance and is occasionally on display at their headquarters.  The display changes every month.
​Address: 141 Rivers Edge Drive, Traverse City MI 49684
​Phone: (800) 922-4050
Website: https://www.hagerty.com/
The original factory located in Napoleon, Ohio is still standing.
Address: 414 Filmore Street, Napoleon, OH 43545
The second factory is no longer standing.  The property where it once sat is now occupied by the Riverine Apartments
Address: 505 Riverine Drive, Traverse City MI 49684/East 8th Street and the Boardman River
​
There was a storage building used by Napoleon as well as the factory.  The building is no longer standing.
​Address: 531-533 West Front Street, Traverse City MI 49686 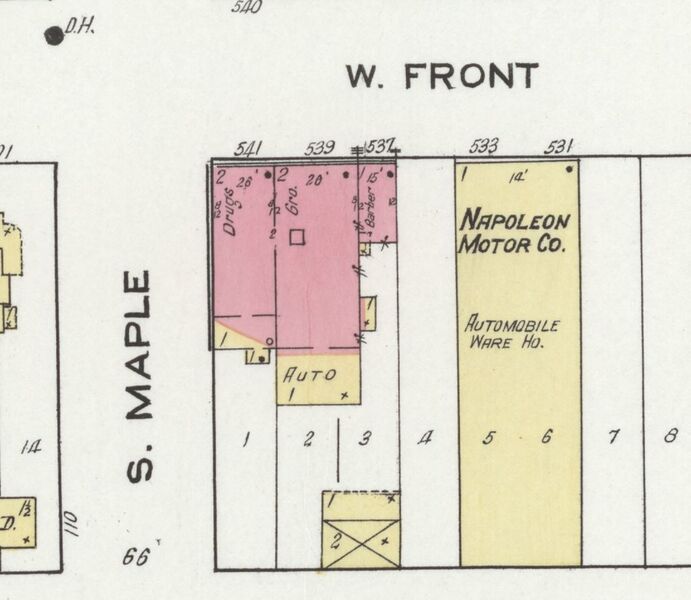 In April of 1920, the Napoleon offices were moved to the Traverse City State Bank building in order to utilize every square inch of floor space in the factory to build vehicles.
Address: 102 West Front Street, Traverse City MI 49684

The Napoleon Motor Car Company was founded in 1916 in Napoleon, Ohio by a group of men who had already been involved in the young automobile industry.  The company found itself in need of a bigger factory and was offered the chance to come to Traverse City, MI where they could keep up with the demand.  The Napoleon car business would move and become the Traverse City Motor Car Company but the truck business would stay behind and became Reya but only survived for a few years.  The company would change its name to the Napoleon Motors Company in 1918 and by the end of 1919 would end its car production and build trucks only.  Production thrived through 1920 but by mid-1921 orders were slow due the numerous trucks on the market manufactured for the war effort and because of the post-war recession in general.  Unable to sustain itself, the company went into receivership in September of 1922 joining the ranks of other failed automobile and truck companies in Michigan and throughout the U.S..

Before Napoleon was formed as a company, F.M. McGraw and A.O. George both had experience in the automotive industry.  George was a former buyer for the McIntyre Manufacturing Company in Auburn, Indiana.  W.H. McIntyre started in the buggy business in 1894 and later expanded into automobiles and trucks...

A.O. George would join McGraw and C.E. Miller to form the Lima Light Car Company.  Light trucks would be built in the back of Miller's grocery store which still stands today.  It is unclear if the original plan was to take over part of McIntyre's company as it went under around the same time.  The McIntyre assets however were said to have been bought by the DeKalb Manufacturing Company who also built vehicles...
Ultimately the company could not keep up with demand...
In just a few short months A.O. George would then form the Fostoria Light Car Company...
Fostoria would take over the buildings of the now defunct Storm Buggy Company...

In 1916 Fostoria also went under and was born again as the Seneca Motor Car Company.  George and McGraw would go on to form a new company that same year...

In March it was announced that the Napoleon Auto Manufacturing Company had chosen its officers and would soon move into the old Morningstar Threshing Machine Plant and start producing vehicles.  Initially a light four-cylinder 25-h.p. model with features such as a selective transmission and an I-beam front axle would be introduced...
In July plans were made for a five-passenger and seven-passenger touring car to be on the market for 1917... 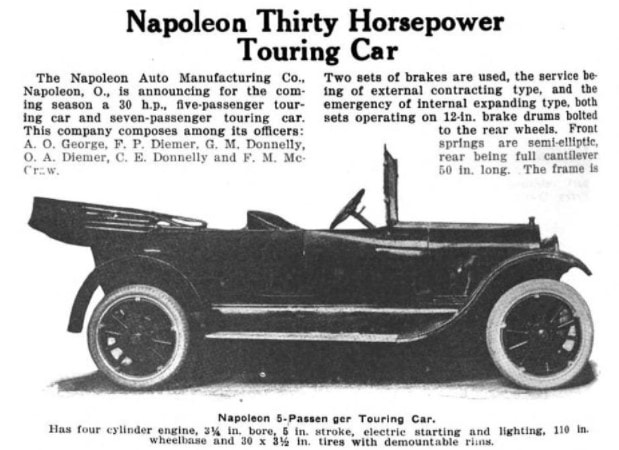 In December the two new models were indeed on the market...

The company had a production problem almost immediately having too many orders and not enough machinery to fulfill them.  They promptly looked for a new city to relocate to and as it turned out, Traverse City was looking to have an automobile manufacturer call their city home.  They were about to lose one of their two major industries in the next six months.  The Oval Wood Dish Company was about to relocate to Tupper Lake, New York because of the lack of wood in the area....
Reports in June of orders for five-thousand passenger cars and three-hundred trucks would indeed have to be fulfilled in a much larger building than the original plant.  Plans for another vehicle were also announced...

The agreement between Napoleon and Traverse City was $75,000 in working capital and free rent for three years in the old W.E. Williams Flooring Company building...
The company was reorganized into the Traverse City Motor Car Company in August and finally the city would be given the opportunity to become part of the thriving automotive and truck business...
The parts for the new factory would come partially from the Ohio plant and as stated above would be bought from the Ross Automobile Company of Detroit equaling enough for three-hundred cars.  Ross was initially a parts manufacturer but became a car manufacturer in 1915.  Although longer, the Ross model is very similar to the Napoleon... 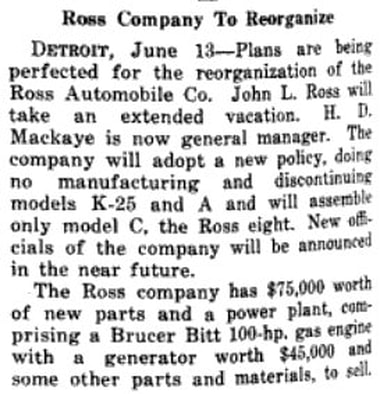 It was only the car manufacturing portion of the company that was to move to Traverse City initially.  The truck division would stay behind and become the Reya Motor Company.  They would build a light truck with one and one-and-a-half ton attachment option.  The Requa Motor Company in New York City would become an agent for Reya and other brands...
By November six cars had been completed and sold with another eighteen under construction.  Contracts for ten cars a day were said to be on the books but there was no guarantee to keep up with that demand.  Three automobile models and a truck model were said to be launching for 1918...

In January the company seemed to be destined for good fortune as production ramped up... 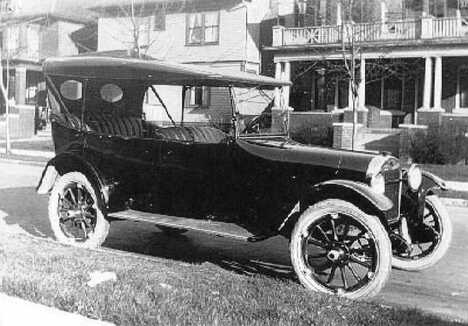 In August it was announced that the company would officially change its name from the Traverse City Motor Car Company to the Napoleon Motors Company similar to its name while in Ohio.  New officers were elected... 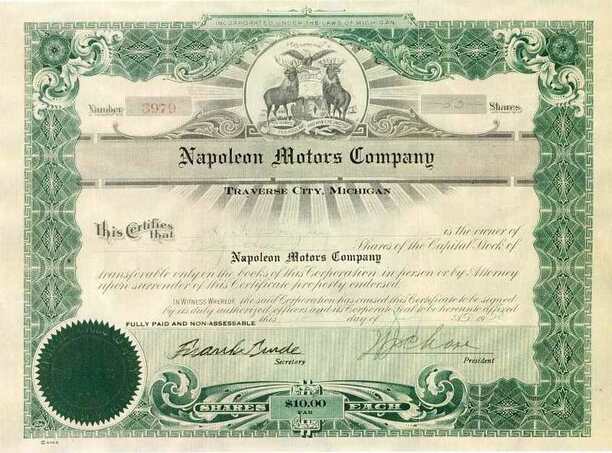 Rennie's Oil Company opened their first gas station on the northwest corner of Union and State.  They displayed one of the first Napoleon cars and were also direct distributors...
Near the end of 1918 the company anticipating building 864 trucks but needed to raise $80,000 in capital to stay in operation... 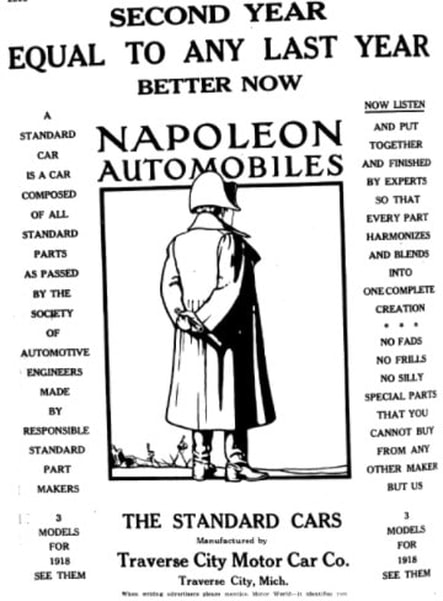 In January of 1919 a stock campaign was put in place to increase the capital of the company to $500k which was accomplished by March.  Orders for new trucks were also flowing in with three to four hundred needed for sales territories in Alabama, Florida, Georgia, and beyond..
The stock campaign had paid off and Napoleon had raised its capital to $500k.  A one ton and one-and-a-half ton model truck were planned for the model year with nine hundred to be built by year's end.  The company instead would increase production to eight to ten trucks a day to fulfill demand...

By June the company was recruiting and promoting great talent from the Republic Motor Truck Company in Alma, MI.  By 1916, Republic was the largest independent manufacturer of trucks in the world...
Near the end of 1919, Napoleon was happy with their advertising campaign and in turn was expanding into other states and countries...
December was the end of the line for Napoleon cars and the company would focus exclusively on trucks going into 1920.  Additional buildings would be built as well partly due to a fire... 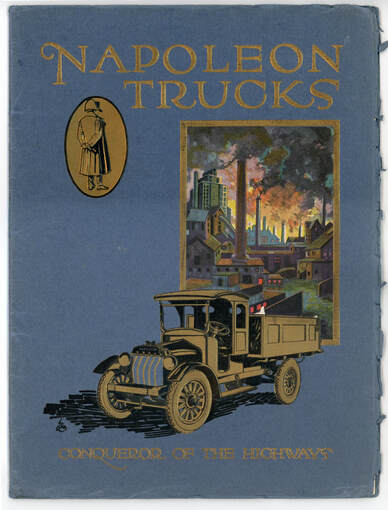 In January of 1920 the company's outlook was the best it had ever been.  Car production ended due to difficulty in obtaining parts and established companies like Ford, Dodge, and General Motors having production advantages but Napoleon's truck business was booming.  The entire year's output of 2500 trucks was already sold and a new five-year lease agreement was made for the factory grounds...
Napoleon was breaking sales records and attracting great talent from the automotive and

By March an idea was brought forth for a lightweight truck due to the abundance of trucks after the war.  A railroad car shortage was helping the truck industry to carry on during this time but Napoleon seemed to still be in good shape with orders and would even raise their prices...
Expansion of dealers continued and office space was rented on the fourth floor of the State Bank building.  The company decided to maximize production using all available space in the factory.  Not even the railroad strike slowed things down...
As business continued to increase, there was a vote in May to increase capitalization in the company from $500k to $2.5 million.  The company continued to innovate with new ideas including a mobile office... 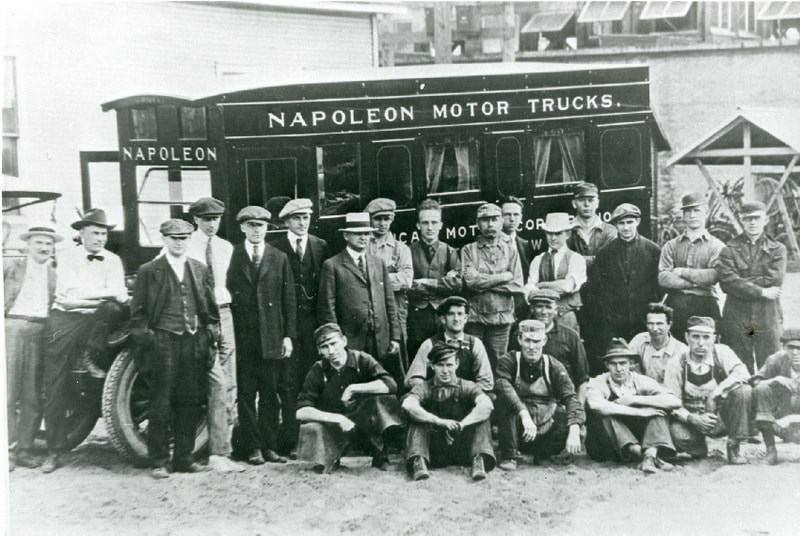 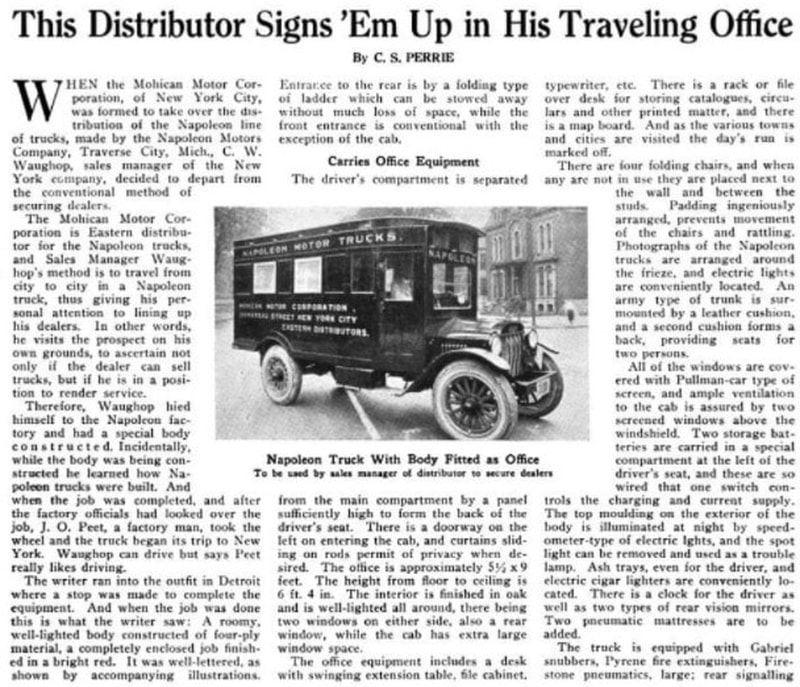 In October a new model was introduced called the Speed-wagon which was a lighter truck than the other two models.  This was most likely the partial solution to the post-war truck problem...
Optimism continued to be high at the end of 1920 for Napoleon.  Trucks were being shipped to many countries and the overall place of the truck and other "trackless transportation" in society would be such as to possibly replace the trolley car and the train...

1921 started off much like 1920 ended with production expected to increase yet again.  Stock dividends would be paid and once again the company looked poised to succeed...

Almost as quickly as things were looking up, by mid 1921 a recession had hit and the money started to run out.  The post-war recession as well as the abundance of trucks after the war helped put the company in a bad position and the company went into receivership in September of 1922.  The next year the plant was sold to the Zapf Fruit Package Company...