The Wills Ste. Claire Museum in Marysville, MI houses the largest collection of Wills vehicles and artifacts in the world.  Out of the approximately 12.000 vehicles produced, less that 90 are known to have survived.
Address:  2408 Wills St., Marysville, MI 48040
Phone:  (810) 388-5050
Website:  www.willsautomuseum.org/
The factory building was bought by Chrysler in 1933.  Gradually all of the original structure was replaced and a "new" Chrysler factory now stands in the location as well as an historical marker.
Address:  940 Huron Blvd., Marysville, MI 48040

Childe Harold Wills, more commonly known as C.H. Wills was an automobile genius who made his mark on the automotive world long before he would ever start his own company.  He worked for Henry Ford starting his career as a draftsman in 1902... 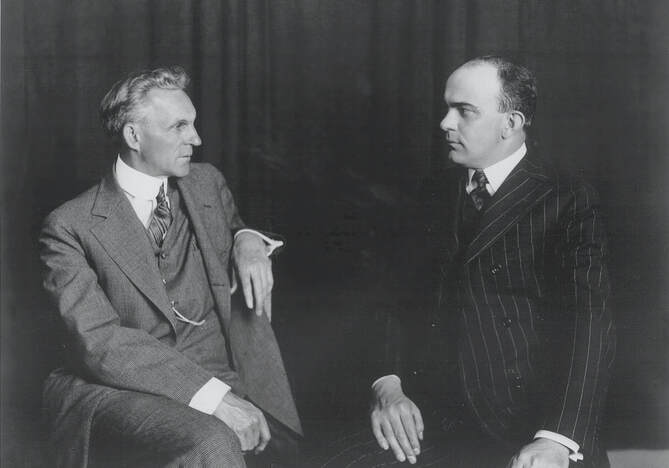 Photo Courtesy of the Wills Ste. Claire Museum
When the Ford Motor Company was organized in 1903, Wills was the chief designer and metallurgist.  The company moved into the Piquette Plant in Detroit in 1904 where several models were built.  In the "Secret Room" in the back of the factory, Ford, Wills, and others worked on what would become the Model "T".  Wills was responsible for much of the design including the planetary transmission(the predecessor to today's automatic transmission).  Other contributions included promoting the use of vanadium steel in the United States which was vital to the Model "T"'s design and designing the script on the "Blue Oval" used by Ford to this day...

Photos Courtesy of the Henry Ford
Jack(John) Beebe who would be head engineer for Wills had been a boat builder in nearby Marine City and with Chris-Craft in Algonac along with his brother Martin and was considered a mechanical genius.  He and Johnny Milot piloted Miss Detroit to victory in 1915 in the Gold Cup bringing boat racing to Michigan and helping start the A.P.B.A.... 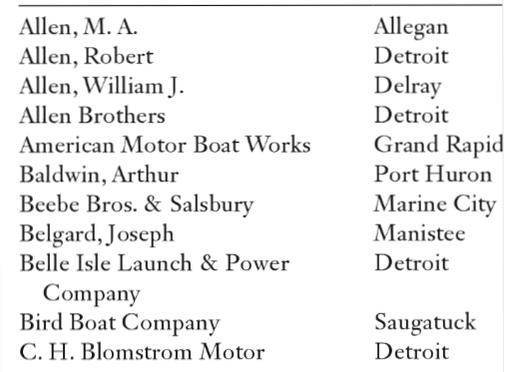 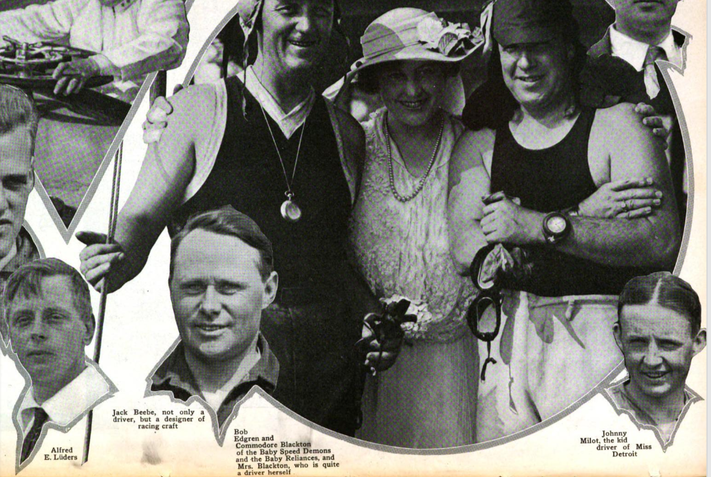 In 1919 Wills left Ford having had some differences with Henry and wanting to move beyond the Model "T".  He cashed out pocketing approximately 1.5 million dollars seeking to start his own company.  The vision of Wills and John Lee was starting to take shape.  Lee had also come over from Ford as well as many other employees and Wills wanted to make a great place to work and live...
The officers were named and stock was offered for the company... 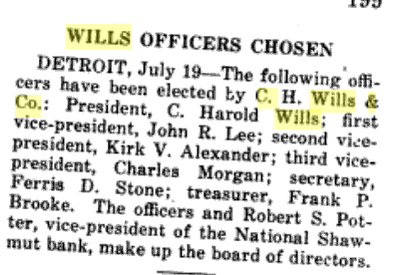 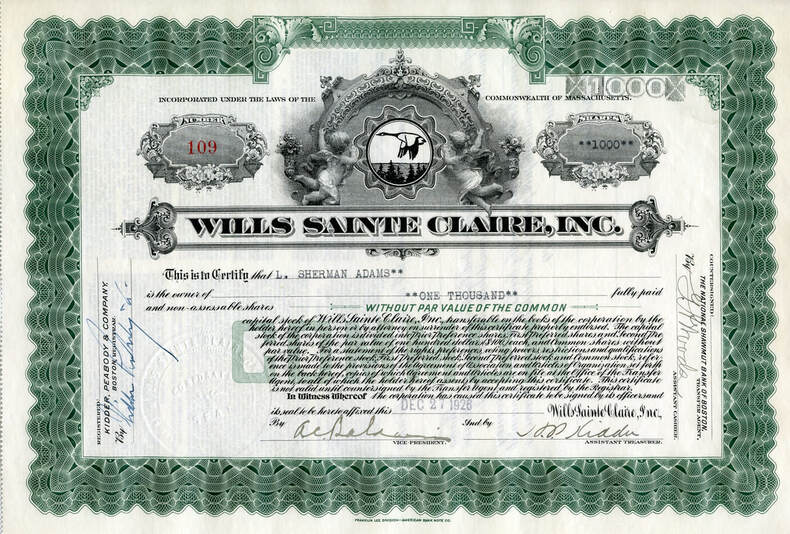 Photo Courtesy of the Wills Ste. Claire Museum
Construction of the factory began after an elaborate ceremony in which the cornerstone was laid in mid-November of 1919...
Photos Coutesy of the Wills Ste. Claire Museum
In celebration of the start of the company, a banquet was held at the Harrington Hotel in Port Huron to introduce the automobile...
Production was to start January 1st of 1921 but the actual vehicles did not start rolling out until March of 1921 with 1537 cars being produced the first year... 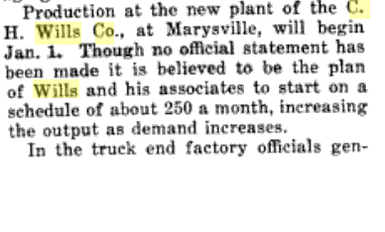 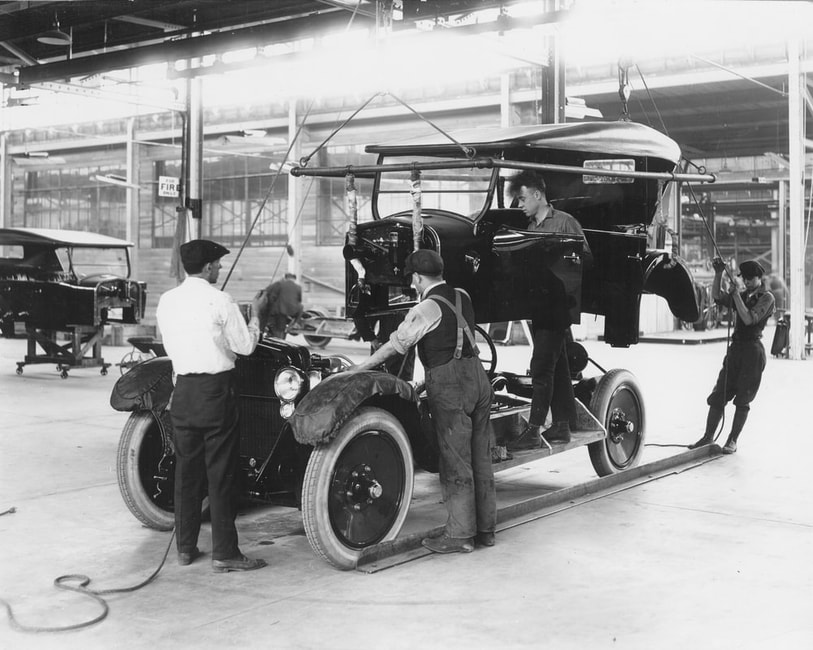 Photo Courtesy of the Wills Ste. Claire Museum
Advertising was strong and Wills had hired some of the best people in the business.  This ad was from The Saturday Evening Post... 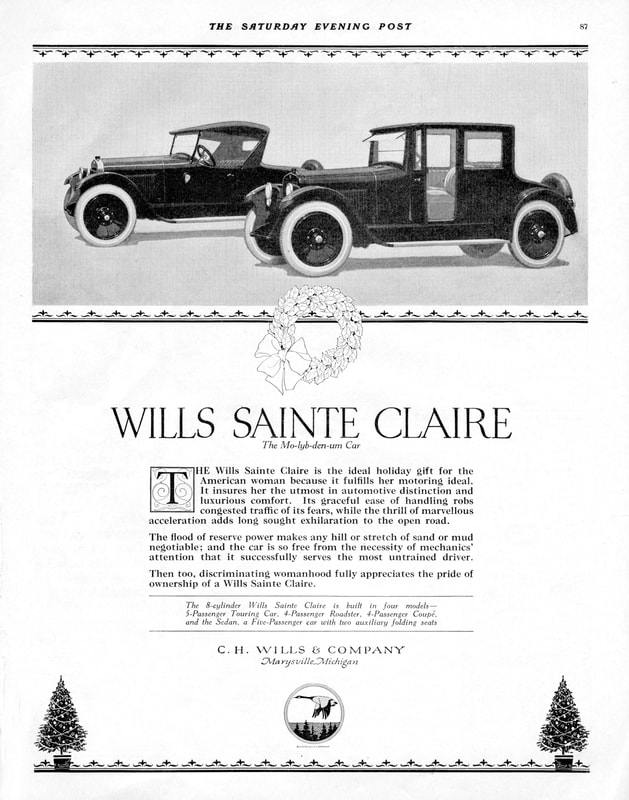 The cars were made out of a metal that was even stronger than vanadium called molybdenum and Wills was the first in the automobile industry to use it.  The engine used exclusively at first was a V-8 which was considered well advanced for 1921.  The inspiration for the twin overhead cam engine came from the Hispano-Suiza aero engine that had become famous in World War I.  The car's emblem was the Grey Goose chosen for the reason that it represented the "wisest and freest traveler of the skies"...

In 1922 the company built 2,736 cars but was out of business by December of that year.  One of the contributing factors to the demise was Wills would think of a new improvement to the vehicle and production would stop.  Everyone who had come with him from Ford had also left by the end of that year.  The company was forced into receivership by November and Wills looked for help to reorganize it.  He convinced a firm from Boston to help him and in 1923 the Wills Ste. Claire Motor Company was born...

The company seemed to be back on track and in 1923 produced a total of 1,554 vehicles.  The advertising campaign continued as well with ads of class and excellent artistic quality.  This ad shows the Wills with the six-cylinder engine.  Wills decided to use this motor as standard equipment but still offered the V-8 as a special option... 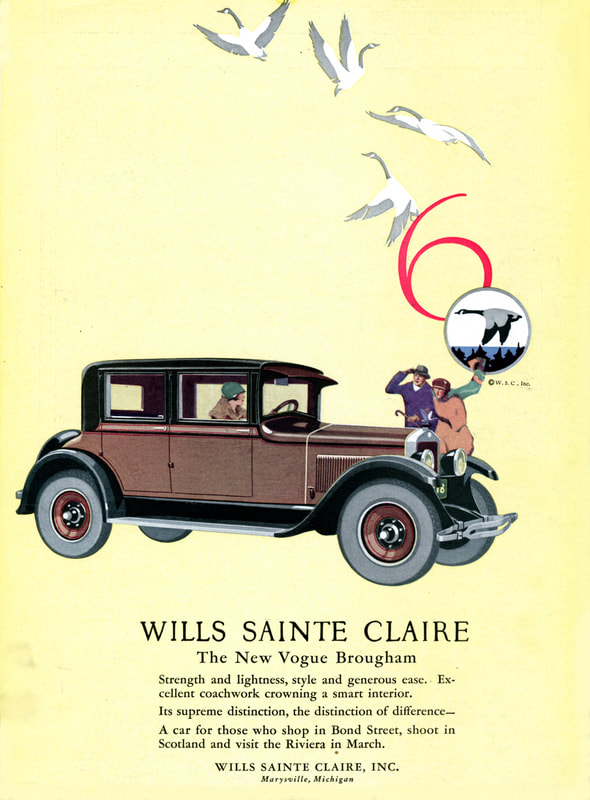 From 1924 until 1926 the company produced approximately another 6,000 cars and it seemed the company's troubles were behind them...
In 1927 the company had only built 330 units and the Wills Ste. Claire Motor Company shut the doors due to a number of factors.  In 1929 Wills was one of a group of engineers who developed the Ruxton which was one of the first front-wheel drive cars in America.  He did eventually go to work for Chrysler and spent his working days in the metallurgy department.  Unfortunately Wills passed away in December of 1940 but not before making his mark on the automotive world like many of the geniuses of his day.
J.E.(Jack) Clifford who had been the sales manager, left the company in 1927 to organize and develop the national dealer program for Chris-Craft in nearby Algonac... 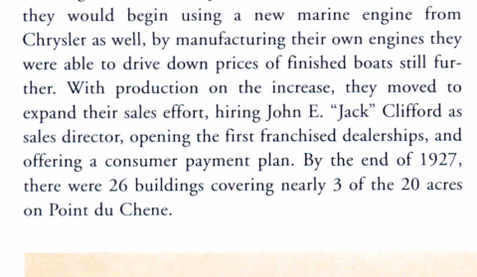 The Chrysler factory went on to build marine engines and the 426 Hemi...